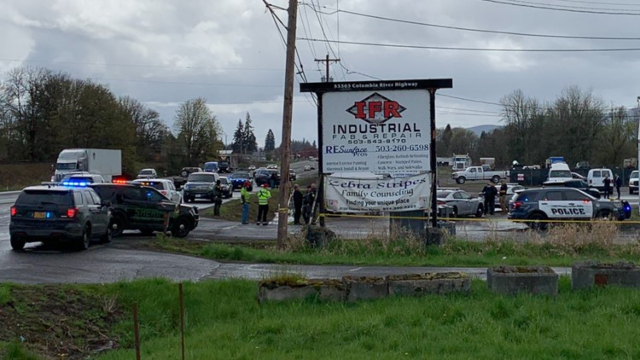 SCAPPOOSE, Ore. — Authorities say a man who was shot and killed by police at Grumpy’s Towing on Highway 30 in Scappoose on March 31st was wanted for murder in Gresham.

Reports are that 39-year-old Michael Stockton got into a fight with employees who called police around 10:00am.  A witness says officers yelled for the suspect to drop a weapon and they heard two gunshots before police returned fire.

A Columbia County Sheriff’s Deputy and an Oregon State Trooper both fired their weapons.  The Washington County Sheriff’s Office Major Crimes Team is leading the investigation.  They say Stockton had two different handguns and fired multiple shots at officers.  Neither the deputy or trooper were injured.

Stockton was wanted for murder in a Gresham homicide earlier this week.

UPDATE: A CCSO deputy and OSP officer discharged their weapons while responding to a disturbance at Grumpy’s Towing in Scappoose. The suspect, an adult male, is deceased. There were no other injuries. An investigation is ongoing and is being led by Washington County Major Crimes.