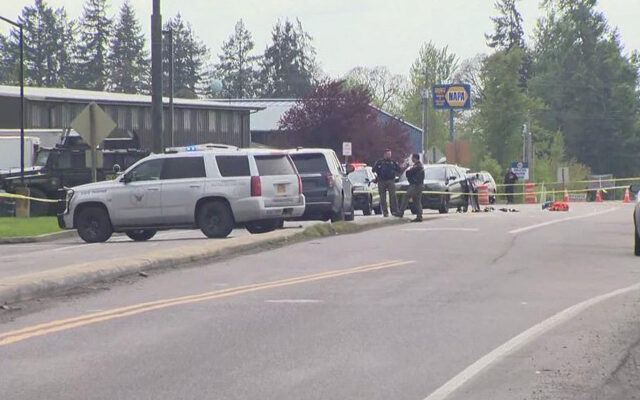 AURORA, Ore. (AP) — A man was killed and an officer was wounded in a shooting outside a truck stop south of Portland near Aurora, Oregon.

The Marion County Sheriff’s Office said in a news release that at about 6:15 a.m. Monday, deputies were called to the Flying J Truck Stop after a man wanted for weapons offenses was seen outside.

He barricaded inside of a van and the Marion County Interagency SWAT team was called. The Sheriff’s Office said after three hours, “gas munitions” were deployed into the van, he exited and “multiple shots were fired.”

Woodburn Police officer Jesse Ponce, 32, was shot and taken to a Portland hospital, where he had surgery and is expected to survive, according to a news release.

The Sheriff’s Office said aid was given but the person identified as Micaiah Clinton, 27, of Portland, died at the scene.

Clinton had outstanding warrants for felon in possession of a firearm and attempting to elude police, the Sheriff’s Office said.

The Oregon State Police are leading an investigation with the Marion County District Attorney’s Office.