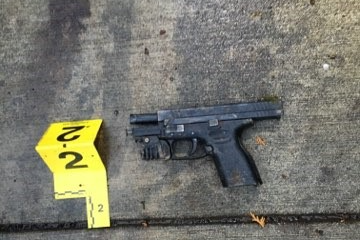 PORTLAND, Ore. — A man was arrested for firing a gun multiple times near Spring Garden Park in Southwest Portland just before 3:00pm on Sunday.

The suspect was found hiding in bushes near SW Spring Garden Street with a black semi-automatic pistol that had a green laser attached to it.

39-year-old Eric Lee Presley Jr. was arrested for felon in Possession of a Firearm, Unlawful Use of a Weapon, and Unlawful Discharge of a Weapon.

Willamette Week reports that that Presley Jr. was connected to a 2003 murder as part of Portland’s illegal night club scene.