Man Arrested For Allegedly Luring A Minor, Authorities Say There May Be More Victims 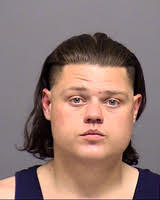 On Friday, May 15th detectives and deputies from multiple agencies arrested 25 year old Anthony James Lauritzen Jr of Tigard on multiple charges including luring a minor and sex abuse in the third degree.

Officers say that Laurtizen Jr came to their attention after he was reported to of allegedly given drugs to a minor and engaged in sexual contact with her on multiple occasions, knowing that she was under the age of consent.

Police say that Lauritzen also allegedly was in contact with an undercover deputy, who he thought was a minor girl.

Authorities say Lauritzen Jr went to Wilsonville, with the alleged intent of having sex with a minor.

Instead of meeting a minor girl, he was confronted by deputies and arrested.

During his arrest, Lauritzen Jr was allegedly found to be in possession of an illegal concealed weapon.

The investigation is still on-going, but officers believe that Lauritzen Jr may have additional victims.

The Wilsonville Police Department asks that anyone with information in regards to Lauritzen Jr’s criminal activity to come forward.