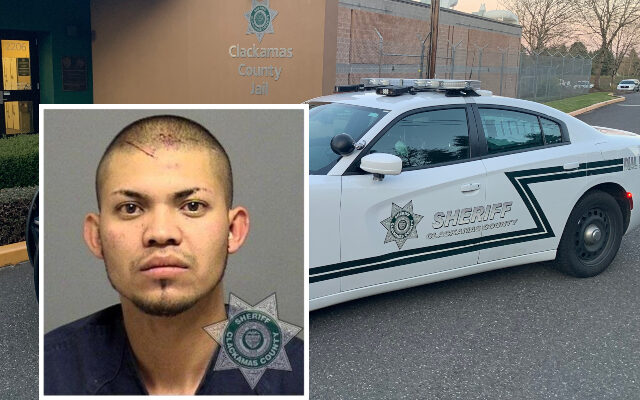 OREGON CITY, Ore. — A suspect went on a wild ride in Clackamas County driving out of control, firing a gun from a stolen vehicle, eluding police, crashing into a garage, breaking into a home and stealing property that finally ended about three hours later.

A witness called 911 after seeing the suspect, identified as 25-year-old Alexis Ibarra Gomez, driving erratically on Barnards Road and running stop signs around 6:00pm on Tuesday.  They followed the driver, who reportedly stopped in the roadway and pointed a handgun out the driver’s-side window, firing multiple shots towards the witness, who ducked down to avoid the gunshots before returning fire with a rifle.

Clackamas County Sheriff’s Deputies spotted the suspect driving north on Highway 213 into oncoming traffic.  Oregon City Police joined in the pursuit and attempted to stop him.  Gomez continued onto Henrici Road where police attempted to use spike strips.  He crashed into the detached garage of a residence on Henrici east of Beavercreek Road, then jumped a fence and ran into a wooded area as additional law enforcement resources flooded the area.

Gomez forced entry into a home in the Beaver Lake area.  The homeowner contacted police when he tripped the alarm system and provided information to dispatchers.  The Clackamas County SWAT Team surrounded the residence and Gomez was arrested on his way out with a bicycle.  He got on the ground and surrendered.  He had changed into a “Talladega Nights” Ricky Bobby racing suit costume that he stole from the residence along with multiple other clothing items.  Authorities believe he also filled a suitcase with ransacked jewelry and other items that he hoped to steal.

Gomez was taken to the hospital for evaluation before being locked up in the Clackamas County Jail on an outstanding warrant and charges including burglary and eluding police.  His bail has been set at $342,500.