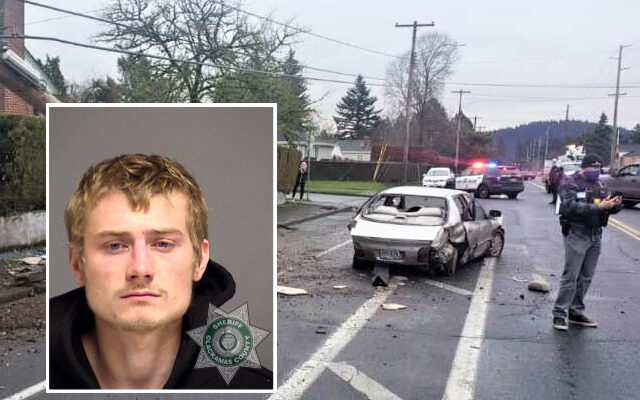 Authorities located Dahlen inside a vehicle at Lents Park on Southeast 92nd Avenue and tried to block him in.  He drove off and fled eastbound on Southeast Holgate.  Officers used spike strips to pop his tires.  Dahlen attempted to swerve around another vehicle and crashed into a retaining wall and power pole near 114th and Holgate, knocking the pole and wires into the street.  He got out and ran, but was arrested soon after.

“It’s clear that this individual has no regard for the safety of the public and will put others in danger in an effort to escape,” said Portland Police Chief Chuck Lovell.  “I’m grateful to the United States Marshals Fugitive Task Force, the PPB Homicide Unit, the Tactical Operations Division, East Precinct patrol officers, and all who worked together to capture this dangerous fugitive.”

Dahlen and a passenger were taken to the hospital for their injuries.  There is no word if the passenger will be charged with a crime.

Dahlen was originally arrested after a foot chase on January 2nd.  He was wanted for ramming a stolen pickup into Officer Jennifer Pierce in her patrol car in a getaway attempt on Christmas Eve at a gas station at the corner of Southeast 39th and Powell.  He was transported downtown to the Multnomah County Justice Center for an interview.  Hours later, officers realized Dahlen was missing from his holding cell.   A cleaning crew is suspected of accidently leaving a door unsecured that allowed him to get free.

He’s facing charges of Attempted Murder, Assault, Assaulting a Public Safety Officer, Unauthorized Use of a Motor Vehicle, and Escape in the Second Degree.