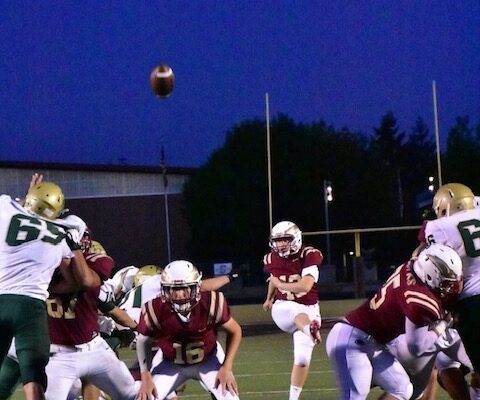 BEAVERTON, Ore. — Junior at Southridge High School, Maya Simon is a 2 sport student-athlete.  She’s a driven young lady with dreams of college and success.  But what makes her unique is that one of her sports is football.  As in, boys tackle football.

Maya tells KXL’s Brett Reckamp she considers herself a leader on the soccer pitch.  Her strength of her game is her powerful right foot.  She says after messing around a little bit on the football field, going 7/8 on extra points, she decided to go out for the football team.  These days, she’s wearing #43 and booting both kick-off’s and place kicks.

Simon says the boys on the team have been terrific.  Her exact words when asked about how they treat her were:  ‘I can’t complain.  I can’t complain.”  She says using the girls locker rooms to get ready sometimes slows her down, but she says she hustles.  On the road, she sometimes gets the entire locker room to herself.  Beyond that, she’s just one of the guys.

As of Week 2 of the 2021 season, Maya had yet to attempt a field goal during a game, but had nailed all but one of her extra point attempts.  One of them got blocked after a penalty.  She says she hasn’t had to make a tackle yet during a kick-off, but will be ready.

You can listen to more of Maya’s interview with Brett below.