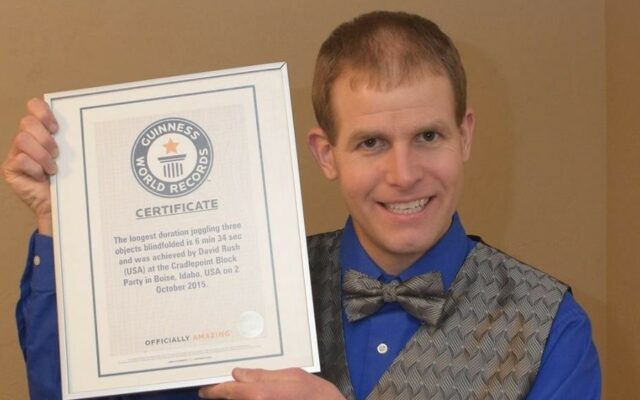 Boise, ID — David Rush has a lot going on these days.  The MIT grad with an MBA From Boise State University works in the tech field for Cradlepoint.  He calls that his day job and enjoys being on the cutting edge of wireless connectivity.

It’s David’s hobbies that have him in the news and on stage since around 2015.  He holds over 200 Guinness World Records for everything from the fastest juggling to the slowest juggling to the most thumbtacks transferred between 2 cork boards in 1 minute.  He balances a lot of things on his chin as well.

Rush tells KXL’s Brett Reckamp he read a few books and had a bit of an awakening that launched him into his growth mindset.  He says he decided to use his juggling skills to break a record, then another and another.  David says he ran into a number of roadblocks over the years and overcame failures through grit.

He has always had a heart for math and currently supports STEM as a way to help younger people realize their fullest selves in the world of math, science, engineering and technology.

Brett’s entire conversation with Brett can be heard below.