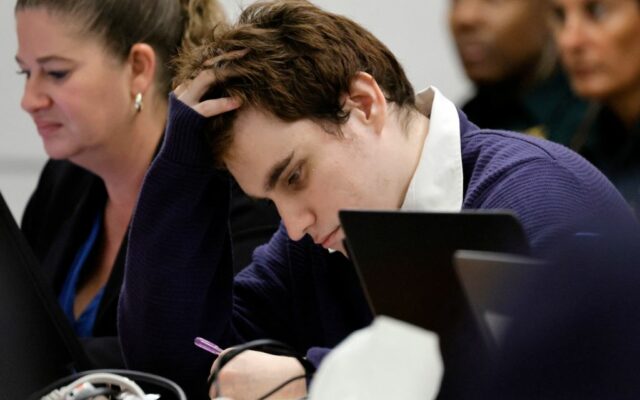 Marjory Stoneman Douglas High School shooter Nikolas Cruz sits at the defense table during jury instructions in the penalty phase of his trial at the Broward County Courthouse in Fort Lauderdale on October 12, 2022. - Cruz, who shot and killed 17 people at a Florida high school in 2018, planned and carried out a "systematic massacre," a prosecutor arguing for the death penalty said Tuesday. (Photo by Amy Beth Bennett / POOL / AFP) (Photo by AMY BETH BENNETT/POOL/AFP via Getty Images)

FORT LAUDERDALE, Fla. (AP) – Florida school shooter Nikolas Cruz will be sentenced to life without parole for the 2018 massacre of 17 people at Parkland’s Marjory Stoneman Douglas High School. That sentence comes after the jury announced Thursday that it could not unanimously agree that Cruz should be executed. The decision ends a three-month trial that included graphic videos and photos, and heart-wrenching testimony from victims’ family members. A judge will formally sentence Cruz on Nov. 1.