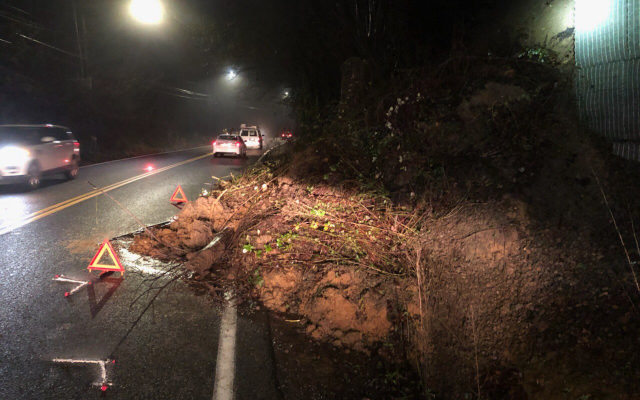 PORTLAND, Ore. — The clean-up of a landslide on West Burnside that occurred on January 24th continues.  The eastbound lane between Barnes Road and Skyline Boulevard has been closed since last Friday.

Today through Sunday, both directions of the road will be closed from 7am-3pm so that heavy equipment can be brought in to remove debris that is at risk of falling.  Only the westbound lane will re-open daily.  The eastbound lane remains closed around the clock until at least Monday, February 3rd.

The Portland Bureau of Transportation advises drivers to avoid the area if possible.  A detour is posted along SW Barnes Road and Skyline Blvd. to the south of Mount Calvary Cemetery.

Crews removed at least seven dump truck loads of debris and built a catchment wall to contain the slide on Friday, but debris continued to fall over the weekend.  The slide has continued to be active in recent days.  More debris was removed this week that fell from the slope and was blocking stormwater.  A pipe to was installed to improve drainage.

The landowner and PBOT will likely need to return to the area for permanent improvements to stabilize the area.  This is the largest slide on a city street in about two years.