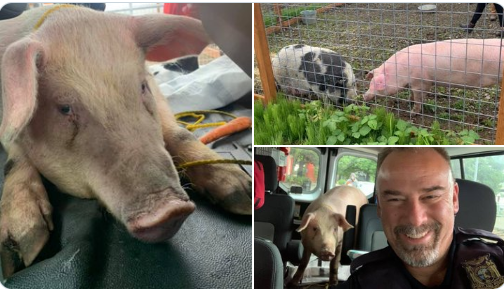 Portland, Ore. – It was almost like a fairy tale unfolded on the Eastbank Esplanade near downtown Portland Saturday night. Betty the Pig went from being in danger of getting butchered, to a pig in a blanket, to a pig in cop custody, to finally a pig on a farm sanctuary. All thanks to some young activists, the police, and two women named Mary and Sue. KXL’s Jacob Dean spoke with Mary McDonald-Lewis on the phone about it. Listen to the full story here.

Mary says Saturday night some of her friends messaged her on Facebook saying they needed her help with a problem that was unfolding on the Eastbank Esplanade near the statue of former Mayor Vera Katz. Some activists were trying to help an abandoned pig. Mary has experience rescuing animals from working with a group called Last Chance For Animals in Los Angeles, California.

Mary drove down to see if she could help. Activists rescued the pig named Betty– apparently from an owner who wanted to “sacrifice the pig to end all brutally.”

Mary says when she arrived, the pig was acting very stressed and couldn’t stop shaking. Several activists put coats and blankets around Betty to try to help. Mary says they started calling for help but couldn’t get any. She says Multnomah County Animal shelter couldn’t help because they didn’t have a rig. Nearby Firefighters and police were too busy at first. They tried calling some 24-hour vets to come out and help. That’s when Mary and Sue decided to spend the night there with Betty the pig on the Eastbank Esplanade. They used their cars and a wall to form a pig pen and Betty finally went to sleep while they stayed watch in their cars.

Finally some police officers arrived to help. One officer had a friend with land nearby that was like an animal sanctuary and offered to take Betty. Mary says they were able to get her out there safely and she’s already seen photos of Betty making friends with other pigs on the farm. Mary hopes Betty is able to live happily ever after out there.

The community members who directed Officers to the sleepy pig in Waterfront Park this morning named her Betty. A generous local farmer has graciously welcomed Betty to their farm. Officer Pelster coordinated Betty’s ride to her new home this morning. pic.twitter.com/FFS5p7bctc

PPB Officers are looking for the owner of this sleepy pig. If you are the owner, call non-emergency dispatch at 503-823-3333. We would like to reunite him with his owner. pic.twitter.com/SlYbLfckYl