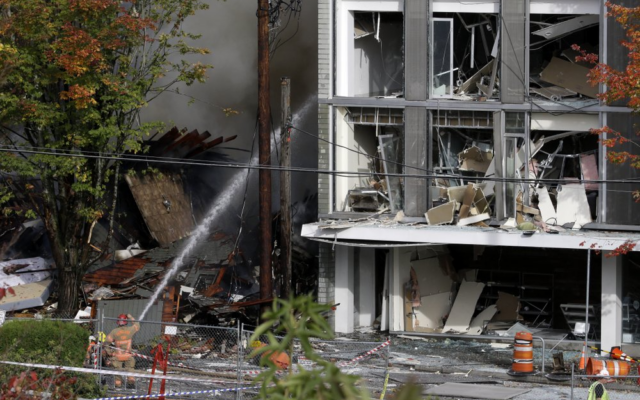 A firefighter battles a blaze after a gas explosion in Portland, Ore., Wednesday, Oct. 19, 2016. A powerful natural gas explosion that neighbors said felt like an earthquake rocked the busy injuring two firefighters and two civilians. One building in the popular shopping district was reduced to rubble and the exterior of one side of another building had been ripped off, its windows blown out. (AP Photo/Don Ryan)

PORTLAND, Ore. (AP) – Two people have together been awarded $10.4 million at trial after a jury found they suffered hearing loss and emotional trauma when they narrowly escaped a natural gas explosion in Portland.

Lawyers for gas leak investigator Eric Rader and Dosha stylist Kristen Prentice said both suffered life-altering changes after an excavator hit a buried gas pipeline Oct. 19, 2016. Rader had found high levels of gas inside a bagel shop and warned firefighters to flee shortly before the blast obliterated the three-story commercial building and gutted a neighboring structure.