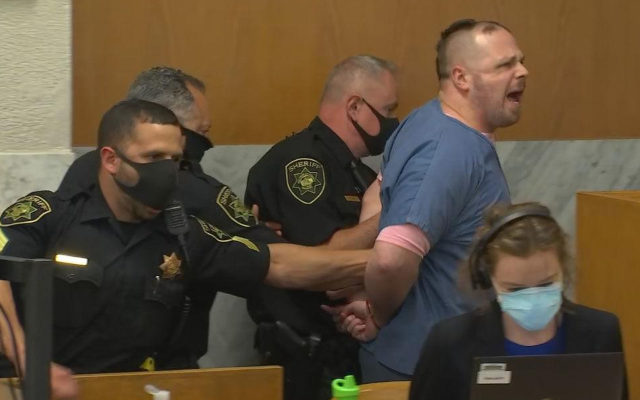 PORTLAND, Ore. — Sentencing for the man convicted of stabbing two men to death and injuring a third on a MAX train in Portland over Memorial Day weekend in 2017 was scheduled for Tuesday in Multnomah County Court, but time ran out to hear impact statements from all 15 victims.

Jeremy Christian was found guilty earlier this year on 12 counts including murder, attempted murder, assault and intimidation for stabbing Taliesin Namkai-Meche, Ricky Best, and Micah Fletcher on the train near Hollywood Transit Center.  The victims came to the aid of two African-American girls who Christian was harassing with a racist rant.

Sentencing was twice delayed due to the coronavirus.  The hearing will resume this morning.

Christian lashed out at Demetria Hester, an African-American woman who suffered a serious eye injury after Christian struck her with a bottle of Gatorade.  She described him as a white supremacist and a plague on society.  Deputies escorted Christian from the courtroom after his outburst.

“And when you die and go to hell, I hope you rot,” said Hester.  Christian responded: “See you there.”  He called her a liar and exclaimed, “I should have killed you!”

Christian was allowed to watch the rest of the proceedings from behind closed doors.

After hearing arguments from defense attorneys and prosecutors, Judge Cheryl Albrecht said she believes Oregon law allows her to sentence Christian to a maximum of life in prison with no chance of parole.  The death penalty has been taken off the table.  Under Oregon’s new sentencing guidelines, Christian’s crimes don’t qualify as aggravated murder.  In November, Judge Albrecht changed the charges to murder in the first degree.

The Associated Press contributed to this story