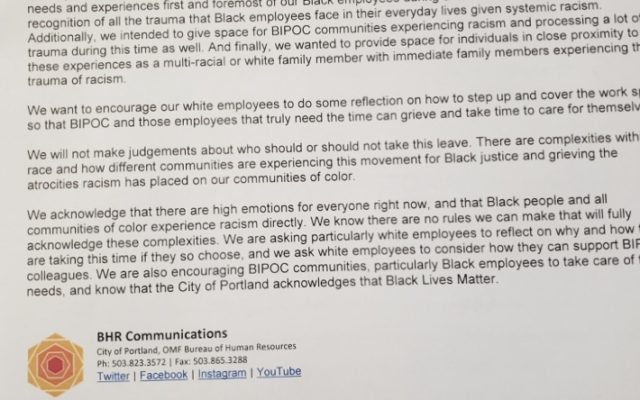 Portland, Ore. – Portland Mayor Ted Wheeler may be having second thoughts about offering a week of paid leave to city employees to grieve the death of George Floyd. According to a new letter from the city obtained by KXL’s Lars Larson, they admit the leave was first and foremost for black workers.
But 75 percent of workers using it, are not black. The letter also asks white employees to cover the work, so those who need the time off can take it.
There are laws meant to prevent things like employers offering special things or privileges to workers based on race, sex, etc.

Let me stick to just facts because you’ll find this hard to believe.

Ted Wheeler wants some folks to pass on bereavement leave.

But only the white ones.

Feckless Ted, graduate in public policy from Ha-vad, watches helplessly as mobs do tens of millions of dollars of damage…I guess Ted missed that Cambridge class on riot control.

So, he offered some cash.  Not HIS millions.  No.  Your money.

Two weeks ago Ted told his 8-thousand employees they could all take a week off, with pay, to grieve the death of George Floyd, murdered by police in Minneapolis.

He ordered supervisors to grant it “without question”.

Today, I have a NEW letter from the city.

It apologetically admits the leave was, quote, “first and foremost (for our) black employees”. Oopsie!

Two weeks into this taxpayer funded gift, he finds out 75% of the people taking it are not BiPOC.  That’s City Hall lingo for “Black, Indigenous and People of Color”

The letter then asks quote “white employees” to “cover the work” so that “BiPOC…who truly need the time can grieve”.

I’m a small employer. I know it’s thoroughly illegal for me to offer anything special to my crew based on race.  Feckless Ted must have missed that lesson at Hahvahd too.