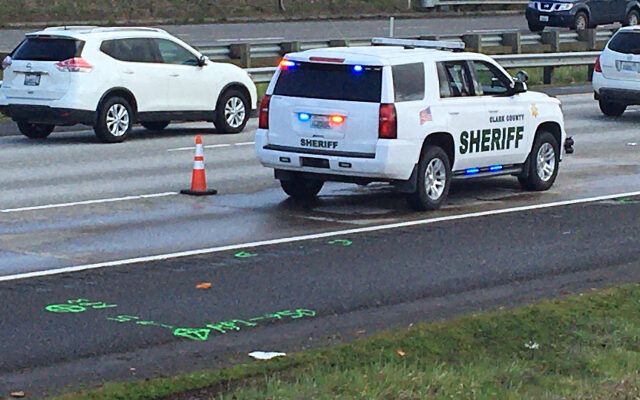 RIDGEFIELD, Wash. — Authorities say a woman on her way to the Clark County Jail managed to get her seatbelt loose and escape from the passenger side window of the patrol car she was being transported in at freeway speed on Interstate 5 southbound near 199th Street in Ridgefield on Monday afternoon.

The woman was seriously injured.  She was being taken to jail for domestic violence assault and interfering with a 911 call.   She has not been identified.

The Southwest Regional Independent Investigation Team will be conducting an investigation with Washington State Patrol as the lead investigative agency.

The deputy involved was placed on critical incident leave.

The freeway backed up for at least seven miles into La Center.

Heads up…We’re seeing a 3-mile backup due to police activity @ClarkCoSheriff on SB I-5 near 199th Street. Plan for extra travel time if you’re heading that way or use an alternate route. @wspd5pio #vanwa #pdxtraffic pic.twitter.com/eUR1d7QkZg

“I saw what I thought was a box come out of the back of a pick-up truck and then 3 or 4 cars all swerving around.  I stood on my brakes and it wasn’t until I got up there that I realized that was a person on the side of the road,” truck driver Tim tells FM News 101 KXL.