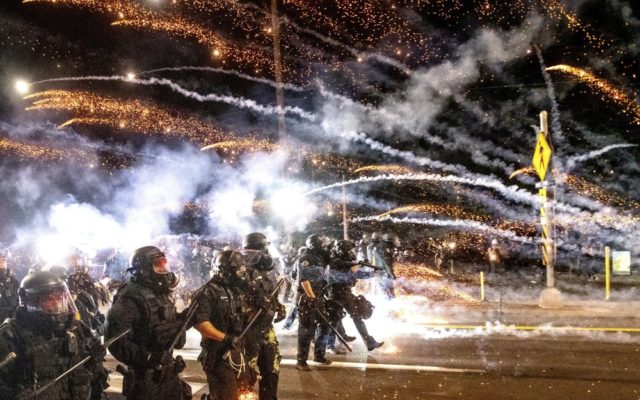 According to Police “Multiple fire bombs, mortars, rocks, and other items were thrown at law enforcement during a riot Saturday night in Southeast Portland.”

Police say a crowd gathered at Ventura Park, then around 9:00 p.m. and began marching in the street toward the East Precinct Community Policing center.

Police say “At about 9:15 p.m, as the crowd approached officers, individuals began throwing multiple fire bombs at officers. One of them caught a community member on fire. Officers later located the injured person and Portland Fire and Rescue medics offered treatment. The injured person was later taken to a hospital by private vehicle.”

Police say shortly after they declared a riot.

According to police shortly after telling the crowd to leave ” Individuals within the crowd began throwing illegal fireworks/mortars at officers. Others were seen throwing rocks. At least one had a “wrist-rocket” type of slingshot launching unknown objects. In order to defend themselves from these assaults, officers used crowd control munitions, including tear gas. Officers made numerous targeted arrests.”

Police say over a four hour period following the crowd stayed in the Mill Park area trying to get around the police blockade.  They continue that rioters continued to light fires in the streets, including dumpsters and garbage cans.

Police say they moved in to put the fires out.

According to police “During numerous confrontations with officers, individuals launched attacks on law enforcement, including throwing objects. A sergeant was directly struck by a commercial grade firework, which burned through his glove and injured his hand (photos). Several officers and troopers were struck by rocks in the head, arms, shoulders, and feet. Only their protective gear prevented serious injury. An Oregon State Police vehicle was damaged by rocks, including broken windows and dents. An unexploded mortar was recovered by police.”

Police say they made over 50 arrests.