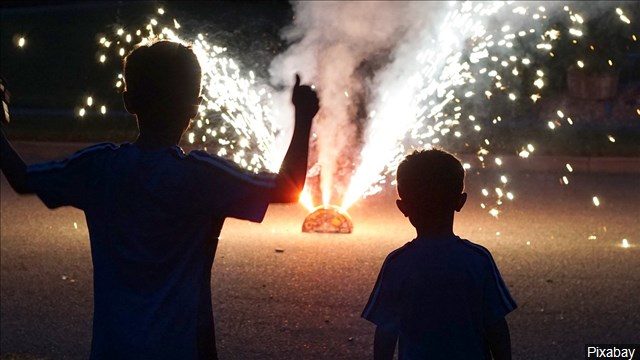 Eugene, Oregon – Here’s your “Get Out Of Trouble Free Card” when it comes to illegal fireworks in Eugene. This weekend you can turn in illegal fireworks to officials without getting cited. It’s happening this Sunday at the parking lot at 2nd and Chambers in Eugene. Do not take fireworks to a police or fire station. It’s only open to the public, not to commercial parties.

Look for the article “Download New App to Report Illegal Fireworks Use”. City officials receive the information along with the geo location from where the picture was taken. Reports will not result in immediate action. Information will be gathered and analyzed to identify areas of the community to target future education and enforcement efforts.

Fireworks are a traditional way to celebrate some holidays, but they can be noisy and an extreme fire hazard. Please be mindful of people in your neighborhood who may be sensitive to loud noises, due to PTSD or other conditions. Especially combat veterans, who deserve our every comfort after their service, can be impacted by the sounds and sights of illegal fireworks. Also many pets are lost each year due to reactions to fireworks.

Fireworks go on sale June 23 and can be sold through July 6. Consumer fireworks discharges within the Eugene city limits are restricted to July 3 and 4, and December 31 and January 1. Public (commercial displays are allowed July 3-5). Eugene Police will be staffing additional officers for the July 4 holiday, including officers detached for patrolling areas with high density of fireworks-related complaint calls and or visible displays of fireworks. Fire crews will patrol neighborhoods in their response areas on July 4, to note and report illegal fireworks activity. EPD crime prevention specialists will make contact at locations of reported illegal use from last year. They will further canvas in areas where an exact address was not known or provided.

To report illegal fireworks within the Eugene city limits, call 541.682.5111. The base fine for illegal fireworks is $250. The social host ordinance also applies to fireworks. The social host, or ordinance on unruly gatherings, holds individuals criminally responsible for hosting, organizing and allowing an unruly event or social gathering. Property owners where the event is hosted will also be penalized if there are multiple violations of this ordinance at the same property. The Eugene Municipal Court has assigned a base fine of $375 for criminal violations of this ordinance. Both hosts and property owners could be civilly liable for police, fire and public works response to repeated illegal gatherings that fall under this ordinance. For more information: SOCIAL HOST

What are Legal Fireworks?

Legal fireworks in Oregon can be sold from June 23 through July 6 of each year. These include fountains, spinners and wheels available at retail fireworks outlets. Additionally, legal fireworks produce only smoke, sparks or fire but DO NOT explode, eject balls of fire, fly into the air more than 12 inches or travel more than six feet on the ground. When both legal and illegal fireworks are improperly handled, injuries and fire damage occur.

Illegal fireworks include but are not limited to, fire crackers, bottle rockets and roman candles, fly into the air, explode and behave in an uncontrolled and unpredictable manner. Illegal fireworks are extremely dangerous and create extreme fire danger. Possession of illegal fireworks is a class B misdemeanor with a maximum penalty of $2,500 and six months in jail.

Cherry bombs, M-80’s and larger and any legal or illegal firework that has been modified are considered an EXPLOSIVE DEVICE and should not be handled. Call the Eugene Police Department immediately and do not transport.