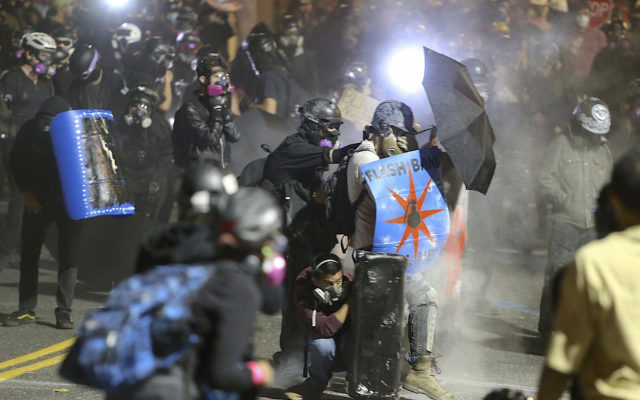 PORTLAND, Ore. — Two groups of demonstrators made their way through the city on Thursday evening.  A small crowd marched from Kenton Park through North Portland around 7:00pm, stopping briefly at the Portland Police Association on Lombard before dispersing peacefully.  Meanwhile, a volatile crowd gathered outside the Immigration and Customs Enforcement office in South Portland, vandalizing the building and assaulting police for a second straight night.

A few hundred people gathered at the ICE building around 10:00pm and blocked the area for the better part of four hours.  Some began tampering with the gate outside the building and tried to break windows.

After midnight, police declared an unlawful assembly due to the threat to safety from the crowd throwing rocks, bottles and fireworks at federal officers protecting the building and shining lasers at them.  Demonstrators also set dumpsters on fire.

The assault on officers continued and more fires were set as police tried to move the crowd on several occasions.  The items thrown at officers included balloons full of paint.

Three people were arrested during the demonstration.