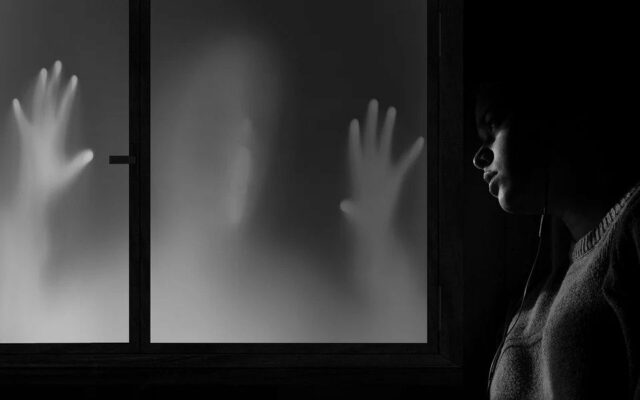 In Brief: Two new films for my Halloween favorite list: Rent-A-Pal and A Quiet Place

The new kids on the block are A Quiet Place and Rent-A-Pal. I’m adding them to my long list of favorites that include:

And several others. No time or space today to list them all but that short list is a pretty one. Here are my reviews of the two favorites on my list.

I fell in love with horror movies as a kid. My first was The Blob in 1958. I was eight-years old and saw the movie in Pendleton. I covered my head with the hood of my coat and hid behind the seat in front of me. Only my eyes were exposed to the screen as the Blob ate this character and that. Then it oozed out of the holes in the projection booth of a movie theater.

I was totally traumatized. The monster was in front of me and — now — even more real in back of me. I was going to be a gonner any second. Life at eight doesn’t get any better than that and I’ve been in love with horror movies ever since.

By the way, the horror films I’m talking about aren’t the Jason, Michael Myers or other baddies of such ilk, or the Saw flick chop-and-slash crap that passes itself off as horror. I’m talking about psychological thrillers. Sometimes they involve traditional monsters like in the original Alien. Other times monsters inhabit a human body.

For guilty pleasure, nothing beats a good horror movie.

That’s Rent-A-Pal. It’s pure guilty pleasure. In fact, it’s so good that Jon Stevenson’s written and directed movie is — so far — my favorite movie of the year. Stevenson’s movie is also going to land on my all time favorite horror movie list.

It is that good and that original.

The story is set in 1990. Brian Landis Folkins is David. He’s a lonely bachelor living with his dementia-addled mother. Taking care of mom is a huge burden on David. To relieve the stress and the yawning loneliness that has become his life, David has joined a dating service. Sadly, the guy isn’t all that hot-looking and with an on-camera personality that adds up to zero, David hasn’t generated much interest.

One day while he’s at the dating service office David picks up a VHS tape for a different service called, Rent-A-Pal. He starts watching the video. Andy is the guy on the tape. He’s played by a bearded Wil Wheaton of Star Trek: Next Generation fame. During his monologue on the tape Andy asks rhetorical questions.

As the movie progresses, and as David slips toward madness, the rhetorical questions seem more like real conversation and the conversation gets deeper. Of course, Andy really isn’t conversing with David.

Wheaton recorded Andy’s parts apart from the rest of the cast. The reasoning is that Andy is on tape and while a real person, the on tape Andy cannot have a conversation.

Wheaton — who we mostly know from his positive work as a kid actor in films like Stand by Me and from the Star Trek series — is a surprisingly excellent villain. He’s a handsome guy and his rent-a-pal pitch is all smiles and upbeat. However, Andy has no soul. He is evil. His dialogue is empty and self-serving.

The beauty of Wheaton’s performance is found in the limited amount of space in which he has to operate. He’s in front of a camera. Andy can’t get up and walk around. Nor does he ever personally interact with David.

So Wheaton has to use facial expressions and hand and body gestures to convey that evil. Nothing is over the top. Like the door-to-door vacuum cleaner salesman of antiquity, Wheaton underplays Andy and the insincerity oozes from the TV screen.

It’s a wonderful piece of work and a performance that makes the implausible plausible.

Of course, the friendless David never sees the evil. Andy is his friend. While you don’t know this for sure, Andy might be poor pathetic David’s only friend — ever. That leads to the beauty of Folkins’ performance. Like the rest of us, he only sees Andy on a TV screen. The two actors are never in the same room. This allows Folkins to really be David and he plays it perfectly.

Best of all, like Wheaton, Folkins doesn’t overplay the part. It’s like, “Oh-well, I’m just an ordinary guy going mad.”

Plus — and this is where Stevenson’s filmmaking and screenplay is so brilliant — Folkins does a great job of connecting you to David. You can’t help but feel sorry for the guy. Though he’s pretty much dismissed by everybody, David is a really terrific person. He is intelligent, deep and caring, and it’s hard to understand why he has no friends or no life.

Wheaton and Folkins also get good supporting help from Amy Rutledge plays a woman David meets from the dating service and from Kathleen Brady who stars as his disoriented, and sometimes inconsiderate, mother.

Stevenson’s superb script and tightly done movie proves a theory I’ve tossed around for the last three decades. His movie appears to have been done on a shoestring budget. With Rent-A-Pal, Stevenson and his cast and crew demonstrate that you don’t have to spend multi-millions of dollars and pack a film with budget-busting special effects to have a great movie. Quality writing, excellent acting, a few special well-time special effects and a lot of imagination is often all you need.

Don’t rent Andy but do rent Rent-A-Pal. You can find it on a variety of streaming services and in some theaters.

I get a lot of complaints from friends about noisy movies. It is true that at times films are so loud it is uncomfortable. Some films overdo sound to the point that the background music and sound effects drown out the dialogue.

Once in a while, someone does one that is quiet. Really quiet. Or to be a bit more specific, it’s when the sound of the popcorn you’re chewing is louder than what’s happening on the screen.That style of film making leads to a different kind of discomfort.

With that we arrive at the silence of  A Quiet Place. It is that silence that is the biggest reason why this movie is so terrifying. Sound can kill you in the dystopian world of John Krasinski and Emily Blunt’s Lee and Evelyn.

A bloody, horrific death is just a small sound away. Drop an object or step on a twig, and lightning fast monsters appear. The creatures can’t see but their sense of hearing rivals a dog’s sense of smell. It’s thousands of times better than ours.

That makes the life of Lee and Evelyn, and of their kids, one of total silence. All conversation is done in whispers or sign language. Paths in and out of their safe-haven farm are lined with sand. Lee, Evelyn and their two children walk everywhere barefoot.

A Quiet Place has one of those great scripts that gives actors a chance to show off their non-verbal skills. There is very little dialogue, and what dialogue there is comes in whispers. While it sounds like a walk in the park, most actors struggle with a skill most of us assume is easy.

Krasinski and Blunt — who are uncommonly good actors — pull it off. Terror, anger, pain and all discussion is done with facial expression and the use of hands, arms and other forms of body language.

Blunt is a Golden Globe winner for Gideon’s Daughter and nominee for The Girl on the Train and The Young Victoria, so we already know she can do drama. She’s on pitch here and her best scene is a terrifying few minutes in a bathtub.

It’s also the most intense scene in a movie full of them.

Krasinski is best known for comedy, light dramatic parts and his role in TV’s The Office. He’s also shined in the Prime Video TV series Jack Ryan. The guy has serious dramatic acting chops and A Quiet Place shows them off perfectly.

Acting is always important to any movie but the real star of this movie is Krasinski the director. A Quiet Place is hold-your-breath intense. Krasinski and co-writers Bryan Woods and Scott Beck put together a movie that rivals Ridley Scott’s original Alien for pure, unadulterated terror.

How good is Krasinski? You’ll find yourself holding your breath and gripping the arm rest of the chair you’re sitting in so hard your hands hurt. Nail-biting will follow and as the credits roll at the end of A Quiet Place, you’re drained, done in, and in desperate need of your own quiet place.

Horror doesn’t get any better than that.

Rent-A-Pal is unrated but probably R for mature themes and violence. A Quiet Place is rated PG-13. Both are incredible horror movies that deserve special treatment (meaning you need to see them) on Halloween. Give them both a Friday Flicks with Gary frightening 5 out of 5

Oregon Governor: Vaccination Plans Have To Be Scaled Back