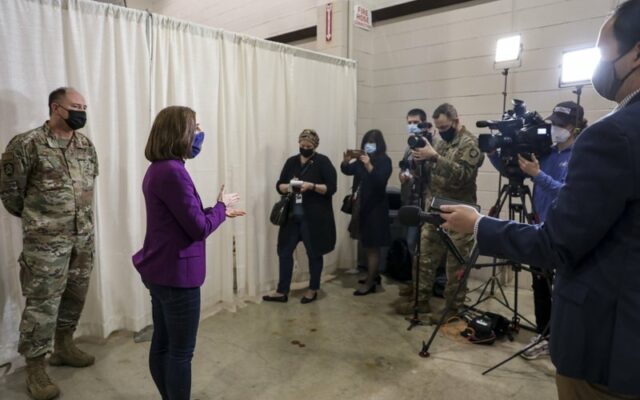 SALEM, Ore. (AP) — A high school in a remote Oregon town ordered a halt to in-person classes Friday after eight people there tested positive for COVID-19, and Republican lawmakers accused the Democratic governor of prioritizing urban over rural residents for vaccine distribution.

The development in the high school in Vale, a town of 2,000 residents in eastern Oregon, comes as Gov. Kate Brown has faced criticism over prioritizing educators over senior citizens for vaccine eligibility in her effort to get schools across the state to reopen. All teachers became eligible to receive scarce vaccines on Monday, even though eligible health care workers, who were prioritized first, haven’t all been vaccinated yet.

Alisha McBride, superintendent of the Vale School District, said all in-person instruction and activities at Vale High School would be paused from Monday through Feb. 11. The eight individuals who had been in the building tested positive for COVID-19 this week. McBride would not say if the eight were students or teachers, but that they apparently became infected outside the school.

“It appears that the positive individuals had contact outside of the school building,” McBride said in an email.

She said she did not know how many teachers have been vaccinated in the school district, located in sprawling Malheur County, because staff members are not required to say if they’ve been vaccinated.

“It is protected health information,” she said.

A spokesperson with the Malheur County Health Department did not respond to a reporter’s question on whether the county has received enough vaccines. The department said on Jan. 22 that almost 2,000 vaccinations had been administered and that it was ready to enter Phase 1b, where educators are vaccinated. It said it was prepared to distribute at least 300 first doses this week.

According to Oregon Health Authority data, around 1,100 educators, from kindergarten through 12th grade, in Malheur County qualify for the coronavirus vaccine.

Meanwhile, doses are being redirected to the Portland metro area, along with other counties who have a significant amount of eligible people not vaccinated, state health official said.

“We are redirecting the doses to counties that have not received enough doses yet to finish that population before we move on to seniors,” said Patrick Allen, director of the Oregon Health Authority.

“Cities and counties across the state … have suddenly had their allocations redirected,” the minority leaders in the House and Senate said in a joint statement.

Brown’s spokesman said an increase in Oregon’s Moderna vaccine allotment from the federal government this week allowed the state to send an additional 17,000 doses to Portland’s tri-county area to help vaccinate the first-phase population.

“Many rural counties have done a fantastic job quickly vaccinating their Phase 1a individuals, and those counties will now be receiving second doses, to ensure those individuals can be fully vaccinated,” said Charles Boyle. “We are all in this together.”

Allen said counties that received higher allocations or that believe they’ve vaccinated their eligible populations will get fewer vaccines next week, while others will get more to accelerate their progress.

“The fact of the matter is there is not enough vaccine to vaccinate everyone who is eligible,” Allen said.

Earlier this week, officials from three Portland-area counties — Multnomah, Clackamas and Washington — said “tens of thousands” of health care workers in the area have not been vaccinated and likely will not be for weeks, because of a lack of doses for the increasing amount of people eligible for shots.

Earlier this month, health officials from Oregon learned the state would receive fewer doses of the vaccine than promised. Allen said at the current level of supply it would take 14 weeks or more to vaccinate all the approximately 1.2 million people who are eligible for the shots.

Currently, teachers and Phase 1A health care workers are being vaccinated. Beginning Feb. 8 more than 800,000 older adults will become eligible over a four-week period. Without any new doses, health officials expect to reach a critical mass of seniors by early May, Allen said.

In addition, on Friday the Oregon Health Authority reported 976 new and presumptive COVID-19 cases, bringing the state total to 141,729. The death toll is 1,938.

Health authority officials say that if Oregon’s current rate of transmission remains the same, they predict that by mid-February, the number of daily cases in the state will decline to an average of 420.