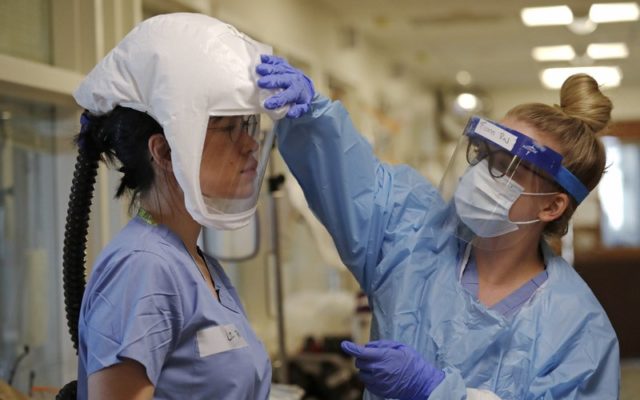 OLYMPIA, Wash. (AP) — Data from COVID-19 projection models show that the rate of infection is increasing in Washington state, Gov. Jay Inslee said Friday, as he urged people to follow his measured approach to slowly reopening the state from his stay-at-home restrictions.

“This is a very challenging moment for us,” Inslee said at a news conference.

The Democrat did say that curb-side retail sales in Washington could begin almost immediately for businesses with reopening plans approved by health officials.

Inslee said data showed that the reproductive rate of the coronavirus in Western and Eastern Washington was above three when the outbreak was first detected in late February and March. That means each infected person infects about three others. It has since dropped to about one, Inslee said, but data up to April 19 shows that the reproduction rate is on the upswing.

“We just are in a very precarious situation, sort of poised on that knife edge,” Inslee said. “If it’s one, you essentially continue to have the same rate of infection.”

Inslee last week announced that his stay-at-home restrictions would be extended through at least May 31 and said there will be a four-stage phase in for lifting of restrictions. There will be a minimum of three weeks between each phase.

However, Inslee did announce that five rural counties will be able to relax some stay-at-home restrictions early as the state move through the reopening process.

The counties are: Columbia, Garfield, Lincoln, Ferry and Pend Oreille. Businesses in the counties approved to move into Phase 2 must wait to reopen until guidance has been released for their industry on how to keep workers and the public safe.

In Phase 2 among the things that would be allowed are in-store retail purchases, with some restrictions, hair salons, barbers and restaurants at half capacity and tables of less than five people.

And Inslee urged people to not avoid needed medical treatment during the COVID-19 outbreak and discussed worrying data that showed childhood immunizations were down.

“We really need our children to be vaccinated,” Inslee said.

Earlier Friday authorities said providers in Washington’s Childhood Vaccine Program reported they administered 30% fewer vaccines to 0-18-year-olds in March of this year compared with the same month in previous years. In April, there was a 42% decrease, according to preliminary reports.

“We are concerned that babies and kids aren’t getting all the vaccines they need to protect them,” Dr. Kathy Lofy, state health officer at the Washington State Department of Health, said in a statement. “Decreasing vaccinations increases the risk that we could see an outbreak of a vaccine-preventable disease.”

Nearly 16,400 people in Washington state have tested positive for the virus and at least 905 have died. The virus causes mild to moderate symptoms in most patients, and the vast majority recover. But it is highly contagious and can cause severe illness and death in some patients, particularly the elderly and those with underlying health conditions.