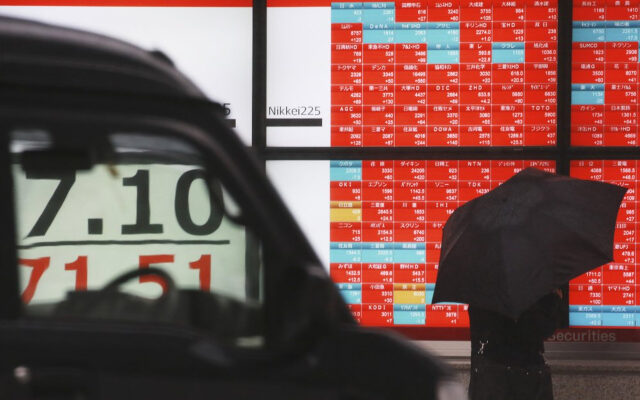 A man looks at an electronic stock board of a securities firm showing Japan's Nikkei 225 index in Tokyo, Wednesday, Nov. 25, 2020. (AP Photo/Koji Sasahara)

TOKYO (AP) — Global shares mostly edged back on Wednesday after the Dow Jones Industrial Average closed above 30,000 points for the first time as investors cheered news of progress on the development of coronavirus vaccines.

Investors seem to be catching their breath after pushing stocks higher in recent days on hopes that coronavirus vaccines will gradually loosen the pandemic’s stranglehold on the economy.

Analysts say markets have also been boosted by news this week that the transition of power in the U.S. to President-elect Joe Biden will finally begin, as well as his selection of former Fed chair Janet Yellen as treasury secretary.

“We are one step closer to moving past the election uncertainty,” said Lindsey Bell, chief investment strategist at Ally Invest. “People are still optimistic about what 2021 has to bring, from an economic perspective and an earnings perspective.”

Traders continue to favor stocks that stand to gain the most from a gradual reopening of the economy, such as banks and industrial companies. Technology and communication stocks, which have been investor favorites through the pandemic, also helped lift the market.

Several candidates are in development for a vaccine. Drugmaker AstraZeneca has said its potential vaccine, being developed with Oxford University, was up to 90% effective. Unlike rival candidates, AstraZeneca’s doesn’t have to be stored at ultra-cold temperatures, making it easier to distribute. Pfizer and Moderna have also reported study results showing their vaccines were almost 95% effective.

Regeneron Pharmaceuticals received U.S. government approval for emergency use of its COVID-19 treatment over the weekend. The drug, which President Donald Trump received when he was sickened last month, is meant to try to prevent hospitalization and worsening disease from developing in patients with mild-to-moderate symptoms.

U.S. markets will be closed Thursday for the Thanksgiving holiday. They will be open for half a day on Friday, closing at 1 p.m. Eastern Time.