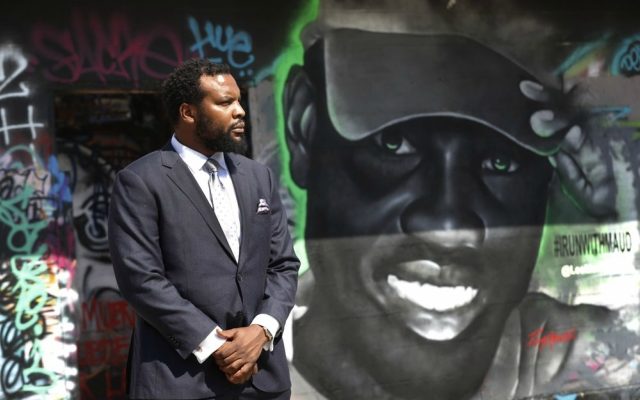 Lee Merritt, a lawyer representing the family of Ahmaud Arbery, poses for a photo by a mural in the likeness of Arbery painted by artist Theo Ponchaveli in Dallas, Saturday, May 9, 2020. Arbery’s mother, Wanda Cooper Jones, has said she thinks her son, a former high school football player, was jogging for exercise before he was killed on Feb. 23. After a video of the shooting emerged on social media, the Georgia Bureau of Investigation, on Wednesday, arrested Gregory McMichael, 64, and his son, Travis McMichael, 34, and they were jailed on murder and aggravated assault charges. (AP Photo/Tony Gutierrez)

ATLANTA (AP) — Georgia’s attorney general on Sunday asked the U.S. Department of Justice to investigate the handling of the killing of Ahmaud Arbery, a black man who authorities say died at the hands of two white men as he ran through a neighborhood.

Arbery was shot and killed Feb. 23. No arrests were made until this month after national outrage over the case swelled when video surfaced that appeared to show the shooting.

“We are committed to a complete and transparent review of how the Ahmaud Arbery case was handled from the outset,” Attorney General Chris Carr said in a statement. “The family, the community and the state of Georgia deserve answers, and we will work with others in law enforcement at the state and federal level to find those answers.”

Attorneys for Arbery’s mother and father applauded Carr for reaching out to federal officials.

“We have requested the involvement of the DOJ since we first took this case,” attorneys S. Lee Merritt, Benjamin Crump and L. Chris Stewart said in a statement. “There are far too many questions about how this case was handled and why it took 74 days for two of the killers to be arrested and charged in Mr. Arbery’s death.”

Last week, a Justice Department spokesman said the FBI is assisting in the investigation and the DOJ would assist if a federal crime is uncovered.

Shortly after the video’s leak, Gregory McMichael, 64, and his son Travis McMichael, 34, were arrested and charged with murder and aggravated assault. The arrests came hours after officials asked the GBI to start investigating. The inquiry was previously in the hands of local officials. 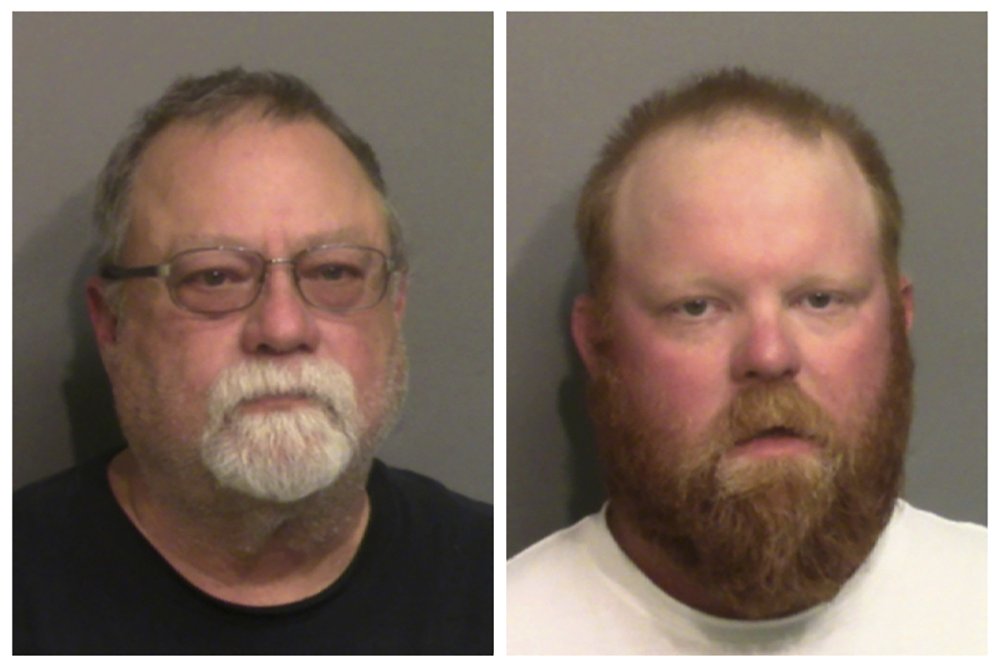 The father and son said they thought Arbery matched the appearance of a burglary suspect who they said had been recorded on a surveillance camera some time before.

Arbery’s mother, Wanda Cooper Jones, has said she thinks her 25-year-old son, a former high school football player, was just jogging in the neighborhood before he was killed.

On Saturday, the GBI confirmed that it has obtained other photos of video that might shed light on the case. The Atlanta Journal-Constitution published footage from a surveillance camera at a Brunswick home near where Arbery was shot that shows someone who appears to be Arbery walking into a home under construction. Arbery then came back out and ran down the street. Someone else comes out across the street from the construction site, and then a vehicle drives off farther down the street, near where Travis McMichael lives.

Lawyers for Arbery’s family say the video bolsters their position that Arbery did nothing wrong, and shows he did not commit a felony. Under Georgia law, someone who isn’t a sworn police officer can arrest and detain another person only if a felony is committed in the presence of the arresting citizen.

“Ahmaud’s actions at this empty home under construction were in no way a felony under Georgia law,” the lawyers wrote in a social media post. “This video confirms that Mr. Arbery’s murder was not justified and the actions of the men who pursued him and ambushed him were unjustified.”

The social justice arm of Jay-Z’s Roc Nation entertainment company on Sunday called on Georgia officials to take quick action in the case.

Also Sunday, Georgia authorities said they had arrested a 20-year-old man after investigating an online threat against people protesting the killing of Arbery.

Several hundred people had protested the case Friday in Brunswick, near the site where Arbery was fatally shot.

The GBI said state police arrested Rashawn Smith and charged him with dissemination of information relating to terroristic acts. He was taken into custody in Midway, a town about 50 miles (80 kilometers) north of Brunswick.

Earlier in the day, the GBI said it had “been made aware of a Facebook post that contains a threat to future protests related to Ahmaud Arbery.”

Investigators later said they believe the threat was a hoax.

“Smith created a Facebook User ID of an unwitting individual to post a hoax threat,” the GBI tweeted.