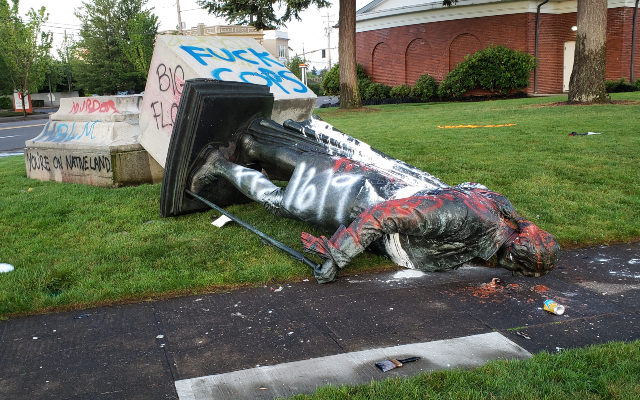 PORTLAND, Ore. — A statue of George Washington in NE Portland was set on fire, toppled and vandalized on Thursday night by protesters.  This marked the 22nd straight night of demonstrations in the city over the death of George Floyd after a Minneapolis Police officer knelt on his neck for nearly nine minutes.

A statue of Thomas Jefferson at the school was vandalized earlier this week.  This makes two statues of U.S. Presidents that have been vandalized during protests in the city.  Both Washington and Jefferson were slave owners.

A second group gathered near the Multnomah County Justice Center downtown on Southwest 3rd Avenue between Main and Madison Street, blocking the street for several hours.  Police say they also threw items such as hotdogs at the doors to the Justice Center.  Several members shook and cut the fence outside the building.  They began marching and stopped outside a business at Southwest 4th and Yamhill before dispersing around midnight.

A third group at Northeast 57th and Sandy Blvd. targeted the George Washington statue on the corner.  The crowd ran off into the neighborhood before police arrived.

There were no arrests made during the demonstrations.