George Floyd, Whose Death Energized a Movement, Buried In Texas 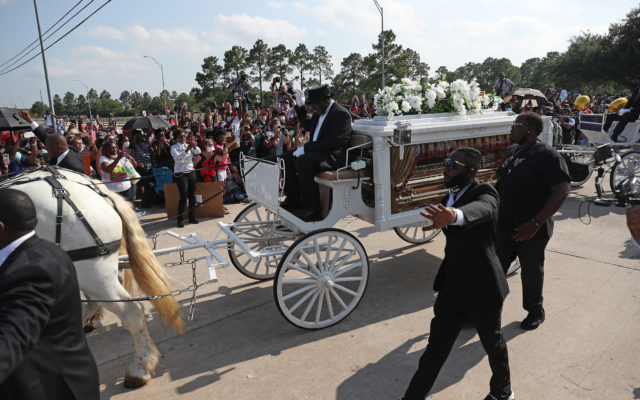 HOUSTON, TEXAS - JUNE 09: People watch as a horse drawn hearse containing the remains of George Floyd passes by during a funeral procession on June 9, 2020 in Houston, Texas. Floyd died May 25 while in Minneapolis police custody, sparking nationwide protests will be entombed at Houston Memorial Gardens. (Photo by Joe Raedle/Getty Images)

HOUSTON (AP) — The funeral of George Floyd has ended, and his casket is on its way to a Texas cemetery for burial.

After emotional tributes from Floyd’s family, a song from Ne-Yo, a recorded message from Joe Biden and a eulogy from the Rev. Al Sharpton, Floyd’s golden casket was carried on the shoulders of pall bearers out of Fountain of Praise church in Houston.

Others held up their phones to film it.

The more than 500 face-masked mourners in the congregation for the four-hour service included actors Jamie Foxx and Channing Tatum, and J.J. Watt of the NFL’s Houston Texans.

The service and upcoming burial bring to a close nearly a week of memorial.