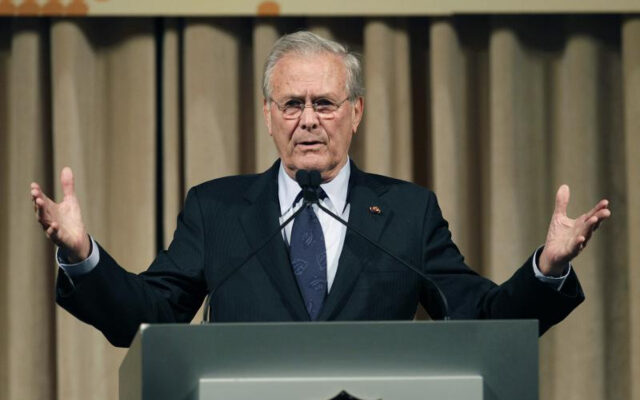 In this Oct. 11, 2011, file photo, former U.S. Secretary of Defense Donald Rumsfeld speaks to politicians and academics during a luncheon on security in rising Asia, in Taipei, Taiwan. (AP Photo/Wally Santana, File)

WASHINGTON (AP) — Calling Donald H. Rumsfeld energetic was like calling the Pacific wide. When others would rest, he would run. While others sat, he stood. But try as he might, at the pinnacle of his career as defense secretary he could not outmaneuver the ruinous politics of the Iraq war.

Regarded by former colleagues as equally smart and combative, patriotic and politically cunning, Rumsfeld had a storied career in government under four presidents and nearly a quarter century in corporate America. After retiring in 2008 he headed the Rumsfeld Foundation to promote public service and to work with charities that provide services and support for military families and wounded veterans.

The two-time defense secretary and one-time presidential candidate died Tuesday. He was 88.

“Rummy,” as he was often called, was ambitious, witty, engaging and capable of great personal warmth. But he irritated many with his confrontational style. An accomplished wrestler in college, Rumsfeld relished verbal sparring and elevated it to an art form; a biting humor was a favorite weapon.

Still, he built a network of loyalists who admired his work ethic, intelligence and impatience with all who failed to share his sense of urgency.

From his earliest years in Washington he was seen by friend and foe alike as a formidable political force. An associate of President Richard Nixon, Bryce Harlow, who helped persuade Rumsfeld to resign from Congress and join the Nixon Cabinet as director of the Office of Economic Opportunity in 1969, called him “rough and ready, willing to tangle” and “the kind of guy who would walk on a blue flame to get a job done.”

He made a brief run for the 1988 Republican presidential nomination, a spectacular flop that he once described as humbling for a man used to success at the highest levels of the government, including stints as White House chief of staff, U.S. ambassador and member of Congress.

For all Rumsfeld’s achievements, it was the setbacks in Iraq in the twilight of his career that will likely etch the most vivid features of his legacy.