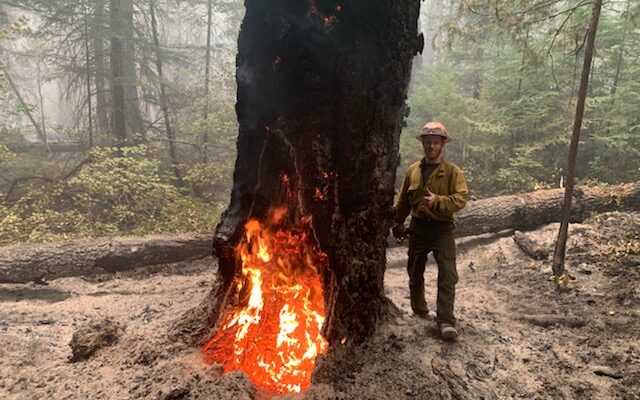 CLACKAMAS, Ore–The original fire started Aug. 16 in a remote part of the Opal Creek Wilderness. It  started a number of other small blazes in the area, including the Green Ridge Fire near Camp Sherman and the Lionshead Fire on Warm Springs Reservation. The fire caused 5 people to lose their lives. 1,700 structures were destroyed. 700 homes lost. Over 200 thousand acres torched. KXL’s Rosemary Reynolds talked with Dean O’Donnell who owns Mt. High Grocery in Detroit. He lost his dream home and three other businesses in the fire.  His son who runs the store also lost his home.  Dean and his wife plan to rebuild what will be a vacation home  at Detroit Lake.  They will live full time in Salem.

Retired now, Clackamas County Sheriff Craig Roberts remembered being home and seeing the wind whip around.  PGE told him it was cutting power over the mountain.  He recalls being ask to meet for now what had become a wildfire emergency.  Deputies knocked on doors to get people out as evacuation orders  went from 1 to 3.  His greatest fear was creating a traffic jam on all the roadways, because everyone would be trying to leave at once with horse trails and livestock in tow.

Tootie Smith now Clackamas county Chair was one of those packing up in Molalla to leave.  She says, ” I’ve never seen anything like it and never expected to be in this kind of dangerous situation.” Chair Smith has worked with staff since the wildfires to come up with a plan for citizen involvement. A  15 member group will help  divide the  county into 21 emergency zones,  each zone can operate independently from each other during any emergency.

Jim Trett Mayor of Detroit is very happy with how Marion County and FEMA are helping the town rebuild.  A Police , Fire, and City Hall Complex is in rebuild mode.  Some Families are rebuilding homes others are not.  At a recent 1 year survival and celebration  gathering people could sign a large banner  that was rolled up and will be taken to people  in Greenville California.