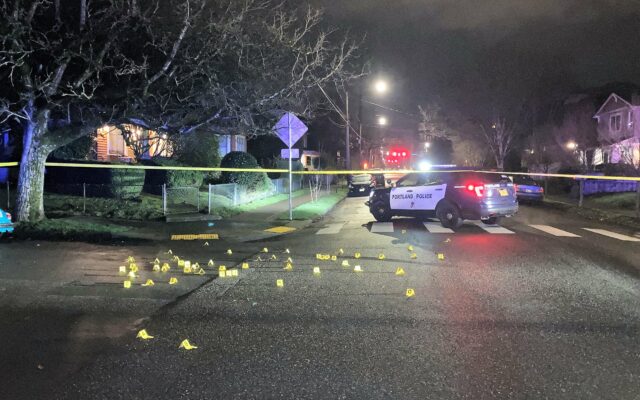 Bullets in the street at NE Skidmore & Rodney

PORTLAND, Ore. —  The city saw a record number of shootings in 2021 with 1,288, 385 people were wounded and 90 homicides.  Since the demise of the Gun Violence Reduction Team, nothing has really replaced it.  The Enhanced Community Safety Team has mainly been doing detective work.  Now that the number of officers on the streets is extremely low, ECST will assist in resolving pending cases and be part of the brand-new Focused Intervention Team, or FIT.

A team of 12 is ready for action as of January 19th.  Acting Lt. Kenneth Duilio went one-on-one with KXL’s Rosemary Reynolds and in nearly 20 minutes, they covered a lot of ground including how it could take years for crimes to be resolved.

“People who know specifics about certain shootings are afraid to speak up for fear of retaliation,” says Lt. Duilio.

He believes the Multnomah County District Attorney’s Office is more now than ever going to prosecute cases it wouldn’t have before.  He’s much more confident if FIT brings solid evidence, more guns and criminals will be off the streets.

“It’s going to take years to bring us back to a peaceful community,” he says.  Duilio believes FIT will be both proactive and reactive depending on the situation.  Their contacts out on the street can be very beneficial to stopping crimes before they get started.

FIT is well aware the work they will be doing is very dangerous.  Officers had reservations about joining the effort not only for safety reasons, but the lack of support from city leaders and the community, worry about families, losing their jobs and even facing prison.