Fireworks Banned In Much Of Metro Area Due To Fire Danger 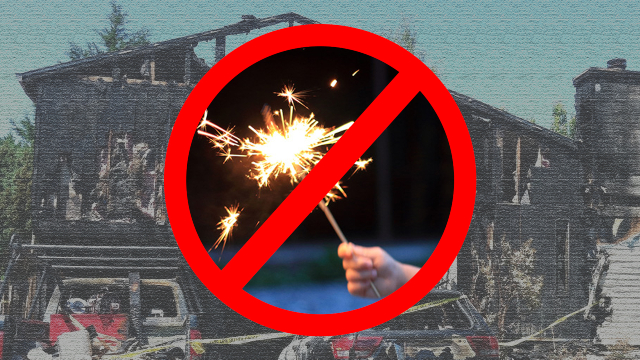 PORTLAND, Ore. — Several cities and jurisdictions have implemented temporary bans on fireworks due to extreme fire danger.  Fire agencies and cities that have not banned fireworks are also warning against their use.  You’re also being asked not to travel to other jurisdictions to use fireworks.

Here is a list of public fireworks displays: Where To Watch Fireworks In Oregon

Portland Fire & Rescue on Tuesday announced an immediate ban on the use of all fireworks indefinitely.

“If we don’t take this proactive step now, I fear the consequences could be devastating,” said Portland Fire Chief Sara Boone.  “It is not easy to make a decision like this so close to our national holiday but as Fire Chief I feel I have a higher responsibility to sometimes make unpopular decisions during unprecedented times to protect life, property and the environment.”

Due to unusually hot temperatures and dry conditions, PF&R is announcing an immediate ban on the use of all legal and illegal fireworks. Please do not call 911 to report fireworks use – our 911 system must be saved for reporting only active fires and serious medical problems. pic.twitter.com/4g0MVefnVT

On Wednesday, Portland Mayor Ted Wheeler signed an emergency declaration that immediately bans the sale of fireworks in the city.

This afternoon, I signed an emergency declaration banning the sale of fireworks for two weeks in Portland, effective immediately. This wasn’t an easy choice, but it’s a necessary measure to reduce the threat of wildfires to the city and all who live here. https://t.co/5uAxSE4NtO

You’re asked not to call 911 to report fireworks.  Officials say it’s vital that the 911 system be kept open only for emergencies.  Investigators will not be patrolling in Portland, but are sending a strong warning that they will investigate all fires connected to fireworks and violators will be held responsible.  Fireworks that cause injury or extensive damage can result in heavy fines and possible jail time.

Multnomah County on Thursday afternoon issued a 30-day ban on the sale and use of fireworks.  Anyone who violates the emergency declaration could be fined up to $500.  Reports of fireworks use can be made by calling the non-emergency line at (503) 823-3333.

“The difficult decision comes in response to record-breaking temperatures and dangerously dry conditions. We recognize that this ban may be disruptive to businesses and non-profit organizations that have been selling, or plan to sell, fireworks, as well as Fourth of July plans,” Chair Deborah Kafoury said. “The declaration is in place to protect the safety of Multnomah County residents and reduce the chances of devastating fires. We encourage residents to find alternative ways to celebrate.”

The City of Gresham has issued a ban on the use of fireworks through July 9th.  Police can issue a fine of up to $2,500 for violations and people will be held responsible if their fireworks cause a fire.  Residents should use the non-emergency number to report fireworks at (503) 823-3333.

“I urge residents to celebrate responsibly with family and friends, with food and games, and in compliance with the fireworks ban, so that we may all enjoy a safe and fire-free Independence Day,” said Gresham Fire Chief Mitch Snyder.

Due to recent hot temperatures and dry conditions, Gresham City Council has joined many other cities around the region in banning the use of all fireworks, both legal and illegal, effective immediately. https://t.co/B1A8419Cnx pic.twitter.com/0ttQvxUaEd

Fireworks are banned in unincorporated #ClackCo. We realize this is a disappointment. It only takes one spark to start a fire that could destroy an entire community. Please be safe this Fourth of July and do not use fireworks or do anything that can create a spark or fire. pic.twitter.com/MK0bqQiE4f

“Our residents are still recovering from the fires that ravaged our community last Labor Day. We’ve already had one fire that evacuated homes in May. We cannot have another,” said Clackamas County Board Chair Tootie Smith.  “The dry conditions and limited water supply puts Clackamas County at great risk for devastating wildfires. Any spark has the potential to destroy our community. As leaders, we must do everything in our normal course of businesses and in emergencies to protect our community from threats. That is why we placed a ban on fireworks this Fourth of July. We appreciate the community’s understanding, cooperation and sacrifice as we work together to protect the place we call home.”

West Linn has banned fireworks through July 13th.  Extra officers will be working enforcement this weekend.  Fireworks may be confiscated and violators are subject to fines up to $2,500 and criminal charges.  Reports can be made to the non-emergency line at (503) 635-0238.

Due to the elevated risk of fire damage caused by extreme heat and dry conditions, the City of West Linn has declared a local state of emergency and is prohibiting the use of ALL fireworks within city limits. Details here >> https://t.co/uWcHrlNcWD pic.twitter.com/Iu3StHfpJ8

Milwaukie has banned fireworks through July 9th.  Police will be patrolling and violators face fines up to $1,000.  People can call the non-emergency number at (503) 786-7500 to make a report.

“We all experienced the devastating fires of last fall and probably know someone who lost their home.  The last thing we want is a fire like that burning through the metro region,” said Milwaukie Mayor Mark Gamba.

The city declared a local state of emergency due to the heat and dry conditions, and banned the use of all fireworks in Milwaukie. Under the declaration the use of fireworks is a civil infraction and subject to a fine up to $1K. https://t.co/Y7cUGvaMvG pic.twitter.com/fnkc5Vchw9

Oregon City Police will have extra officers working enforcement over the weekend to cite anyone using illegal fireworks.  Fines start at $500.  Residents can report illegal use of fireworks within the city limits to the non-emergency line at (503) 655-8211.

Clark County has also banned fireworks.  This comes on top of bans by the cities of Battle Ground, Camas, La Center, Ridgefield, Vancouver and Washougal.

“We’ve had an unusually dry spring for the Pacific Northwest,” said Clark County Fire Marshal Dan Young.  “That coupled with a record-breaking heat wave led to conditions that increase our fire danger risk in Clark County.”

Fines for illegally discharging fireworks in Camas and Washougal start at $250.  To make a complaint, residents are encouraged to call 3-1-1.

Tualatin has banned fireworks through July 9th.  Police will confiscate fireworks and issue citations if necessary.  The community is asked to report any firework activity to the non-emergency line at (503) 629-0111.

It is hot and dry. Out of an abundance of caution, City Council declared an emergency resolution banning the use of ALL fireworks in Tualatin, from now through July 9th. Please call non-emergency (503-629-0111) to report any firework activity. Stay safe!https://t.co/yNZgUUah77 pic.twitter.com/QfikXNgUIo

The city of Tigard has also implemented a ban.

City Council passed an emergency declaration to take steps to mitigate the risk of fire danger. Following the resolution, they voted to ban the use of all fireworks within city limits effective immediately. #Tigard #CityofTigard #TigardOregon pic.twitter.com/g6x7UYve5V

The city of Sandy has cancelled their 4th of July fireworks show and urge residents not to use fireworks in town.

According to the National Fire Protection Association, fireworks cause more than 19,000 fires each year in the United States.