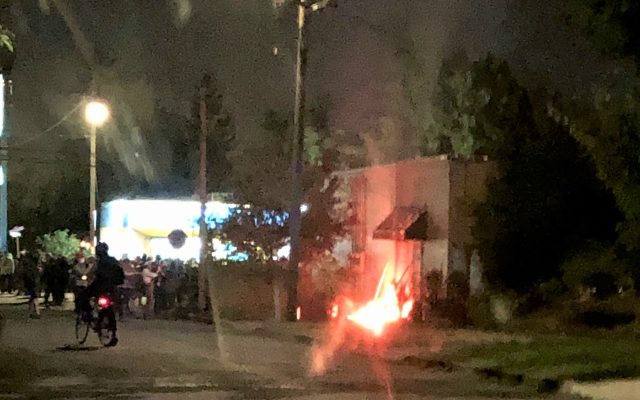 Fire set outside the Portland Police Association on August 24th, 2020

PORTLAND, Ore. — 25 people were arrested during a demonstration outside the Portland Police Association late Monday night that was quickly declared a riot.  Police say the group set fires outside the building on North Lombard and assaulted officers.

Failure to leave now will subject you to arrest and/or the use of crowd control munitions including but not limited to tear gas and impact weapons. Leave to the west now.

Police say the crowd cut power to the building and set several fires to the side of the building, which is located near a residential area.  They say one fire grew rapidly after someone appeared to pour an accelerant on the flames.  A riot was declared due to fire danger in the neighborhood and “extreme life safety concerns”.

Portland Police Association, the police union building in Portland is on fire pic.twitter.com/0TSIBKmKJI

Officers disengaged after most of the crowd was moved out of the area, but the crowd returned and blocked traffic with chain link fencing and set another fire in the street and more fires on the side of the union office.  As they were breaking up the gathering, officers were surrounded by a crowd who hit them with objects and threw rocks.

After multiple warnings, officers used tear gas and other crowd control munitions to restore order by about 1:00am.