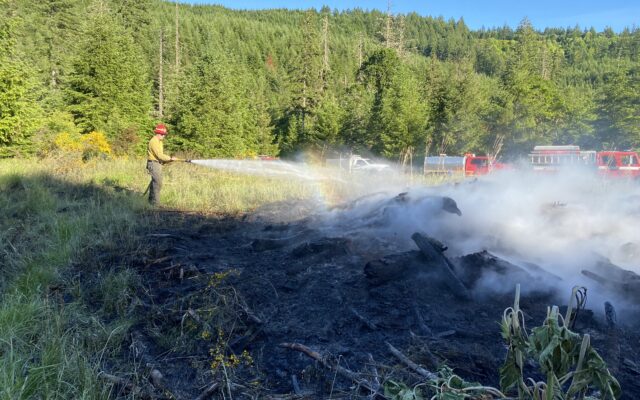 Forest Grove Fire and Rescue says just before 5PM on Friday, Gaston Firefighters responded to a reported brush fire near Mount Richmond Road and South Road near the community of Cherry Grove.

Fire crews say they traveled on a rough, overgrown dirt road for about a mile when they found the fire burning in light vegetation.

Fire crews worked to attack the flames and stop the fire from spreading.

In total about a half acre was burned, according to Forest Grove Fire and Rescue .

As additional crews arrived, they were able to extinguish remaining hot spots and dig a dirt trail around the perimeter.

Forest Grove Fire and Rescue says, “Firefighters were assisted by a extremely generous neighbor that used his tractor to cut and mow along the perimeter, saving firefighters over an hour of additional work. The firefighters then turned their attention to digging apart and cooling down the burn pile.”

Fire crews say, “The burn pile was not attended by anyone and had no safety measures in place.”

Forest Grove Fire and Rescue cautioned, “We want to remind everyone, especially with hot temperatures approaching. If you’re going to have a burn pile, always watch the burn with a hand tool and water source, have a bare dirt area surrounding it (width should be as high as the flames) and never leave them unattended.”