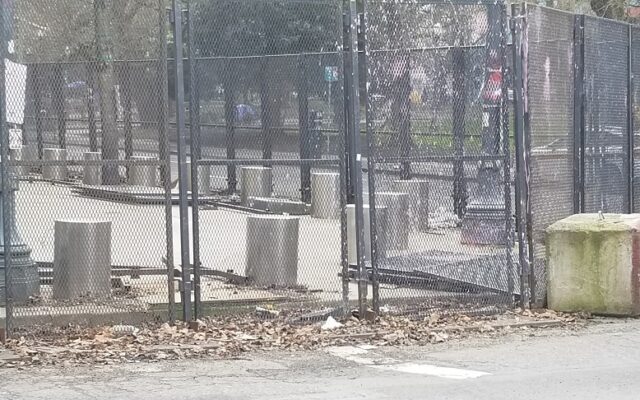 Portland, Ore. – The massive security fence around the Mark Hatfield Federal Courthouse in downtown Portland is starting to come down. When KXL reporter Jacob Dean checked out the action Tuesday afternoon, most of the fence barrier was still up surrounding the building. But workers were taking down some supporting sections of the fence and laying them on the ground along SW 3rd avenue, between the fence and the courthouse. Crews tell us the fence should be completely down sometime this week.

It’s been up for eight months – and was first erected last summer to help combat riots and damage from protesters. The eight-foot-tall fence with reinforced steel mesh panels was designed to prevent climbers and resist a car crash at 30 miles an hour. The cost to taxpayers to rent the fence all this time is reportedly over $200,000 dollars. The removal of the fence is the latest symbol of a return to normal for a battered and bruised downtown. A similar fence went up and has came down outside the Justice Center, and all the plywood was taken down from City Hall windows recently.

More about:
coming down
Courthouse
down
downtown
federal
fence
Portland