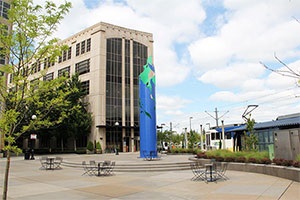 The cost of earthquakes to our country averages each year at $6 billion. The Federal Emergency Management Agency, or F.E.M.A. is looking at an Oregon way to make buildings earthquake-ready.

Managers wanted to hear how Oregon is using the C.P.A.C.E. Commercial Property Assessed Clean Energy Program, to pay for getting buildings ready for the next big one. It’s financed seismic retrofits for commercial buildings in Oregon and California.

The program originally helped pay for energy, road, water and sewer improvements.  “Financing improvements to private property using this historically publicly financing tool was a good use of the tool because of the public benefit,” said Haack. “With some legislative modifications to the C.P.A.C.E. Program, we were able to expand its authorization to include seismic resiliency as an eligible use.”

She says it assesses property owners for the costs.  That means in the Oregon legislature, “It got support from both sides of the aisle, because it did not have to compete for public resources.”

Hack said the effort had to focus on education. “Folks have to understand what the risk is, of the situation, and the seismic risk here in Portland and in Oregon,” explained Haack.

He says F.E.M.A. is looking at using this type of financing to prepare other communities.