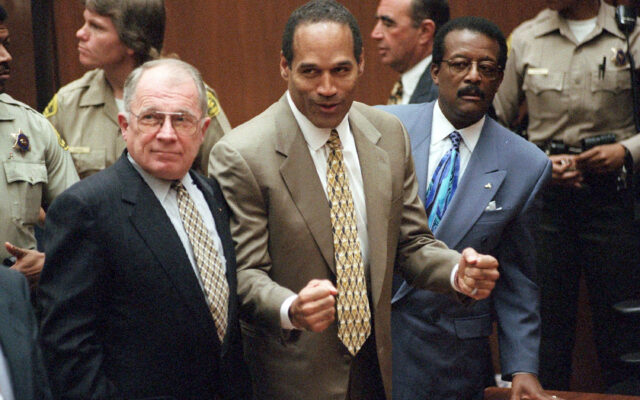 FILE - In this Oct. 3, 1995, file photo, O.J. Simpson reacts as he is found not guilty in the death of his ex-wife Nicole Brown Simpson and her friend Ron Goldman in Los Angeles, as defense attorneys F. Lee Bailey, left, and Johnnie L. Cochran Jr., stand with him. Bailey, the celebrity attorney who defended O.J. Simpson, Patricia Hearst and the alleged Boston Strangler, but whose legal career halted when he was disbarred in two states, has died, a former colleague confirmed Thursday, June 3, 2021. He was 87. (Myung J. Chun/Los Angeles Daily News via AP, Pool, File)

The death was confirmed Thursday by Peter Horstmann, who worked with Bailey as an associate in the same law office for seven years.

Bailey had been called arrogant, egocentric and contemptuous of authority.

But he also was acknowledged as bold, brilliant, meticulous and tireless in the defense of his clients.

Simpson once called Bailey the most valuable member of the legal team that got him acquitted of killing his wife and her friend in 1995.

Bailey was disbarred in Florida and Massachusetts in the early 2000s for mishandling $6 million worth of stock for a client.

But won the right to practice law in Maine in 2013.