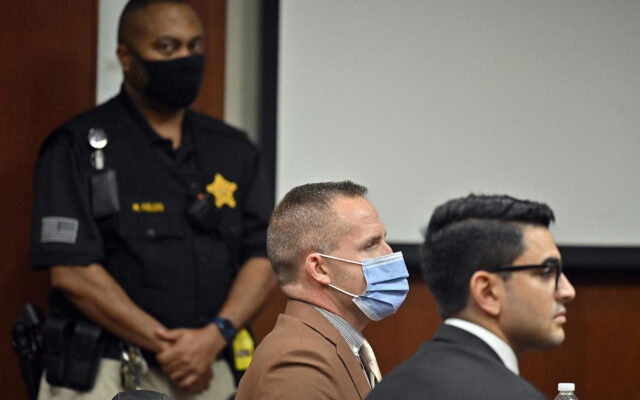 LOUISVILLE, Ky. (AP) — A former Kentucky police officer was found not guilty Thursday on charges he endangered neighbors the night he fired into Breonna Taylor’s apartment during a botched drug raid that resulted in Taylor’s death.

The panel of eight men and four women delivered its verdict for Brett Hankison about three hours after it took the case following closing arguments from prosecution and defense attorneys.

Taylor’s mother, Tamika Palmer, and a group of friends and family left quickly without commenting after the verdict.

Hankison did not appear outside the courtroom after the verdict was read. But his attorney Stewart Mathews said he and his client were “thrilled.”

Asked what might have swayed the jury, Mathews replied, “I think it was absolutely the fact that he was doing his job as a police officer.”

Prosecutors stressed in opening statements that the case wasn’t about Taylor’s death or the police decisions that led to the raid. Jurors were shown a single image of her body, barely discernible at the end of the hallway.

Taylor had been settling down for bed when officers arrived at her door. She was shot multiple times in her hallway and died at the scene.

Protesters filled the streets for months after Kentucky Attorney General David Cameron’s office declined to seek charges against any of the officers in connection to Taylor’s death. Her name, along with those of George Floyd and Ahmaud Arbery — Black men who died in encounters with police and white pursuers — became rallying cries during racial justice protests seen across the nation in 2020.

Sadiqa Reynolds, president and CEO of the Louisville Urban League, said she was not surprised by the verdict. Black residents of the city, she explained, had already been “experiencing a certain amount of frustration,” because no officer had been charged for Taylor’s death.

“I think there are a lot of people who are disappointed. It is very disheartening, but I have to tell you, it’s just not surprising,” she said. “It just doesn’t feel like an optimistic day for policing, for Black people, for our entire community.”

Louisville Mayer Greg Fischer said the jury’s verdict added to the “frustration and anger of many over the inability to find more accountability for the tragic events of March 13, 2020.”

“While the conduct considered in this case was not specific to Breonna Taylor’s death, the fact remains that she should not have died that night, and I know that for many, justice has still not been achieved,” he said.

Fischer cited some of the changes Louisville metro government has made since Taylor’s death, such as banning so-called no-knock warrants and conducting a top-to-bottom review of the police department.

Hankison, 45, had been charged with three counts of wanton endangerment for firing through sliding-glass side doors and a window of Taylor’s apartment during the raid. Multiple bullets passed through the wall of a neighboring apartment, and prosecutors said Hankison endangered the lives of a pregnant woman, her young child and her boyfriend who lived there.

Hankison’s attorneys never contested the ballistics evidence, but said he fired 10 bullets because he thought his fellow officers were “being executed.”

One of those officers, Sgt. John Mattingly, was hit in the leg by a bullet from a handgun fired by Taylor’s boyfriend, Kenneth Walker, who said he thought intruders were breaking in.

“The jury felt like you go out and perform your duty and your brother officer gets shot, you got a right to defend yourself,” Mathews said. “Simple as that.”

Taylor was killed in the fire returned by Mattingly and fellow officer Myles Cosgrove.

Hankison was fired by Louisville Police for shooting blindly during the raid. Asked during the trial if he did anything wrong that night, he said “absolutely not.”