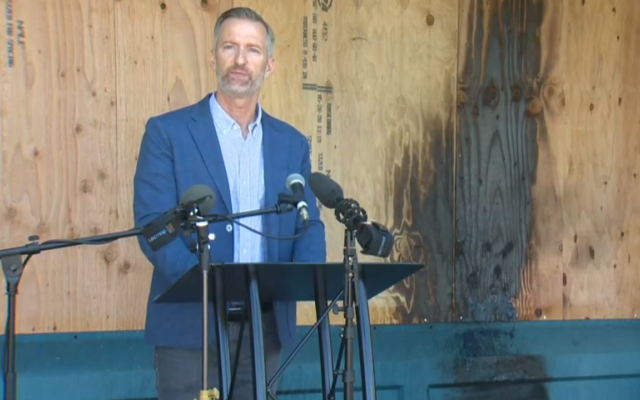 Portland, Ore. – What happened last night in Northeast Portland was evil, and it is not transformation. Very powerful reaction this afternoon from the Chief of Police, Mayor, and community members, after demonstrations turned destructive at the North Precinct on MLK Blvd, and put lives at risk. Police say at least four people were arrested after protesters started vandalizing the North Precinct, using using dumpsters set of fire to block the buildings exits, trapping people inside. Some businesses were also damaged.

Many spoke compassionately at today’s press conference on NE MLK where it happened, with the charred buildings
behind them. Portland’s new Police Chief Chuck Lovell called the violence “evil.” Mayor Ted Wheeler says it’s “not transformation” and “not acceptable.”  A business owner who’s shop was damaged says the Northeast Portland community doesn’t get down like that, they are champions about building each other up, not burning it down. 6th generation Oregonian Carolyn Leonard, who chaired the community that changed the name of the street to Martin Luther King Jr Blvd, also spoke out saying it’s never tolerable to use that kind of violence. Several officers were hurt during the incident, suffering minor injuries.

Listen to some of the speeches here: