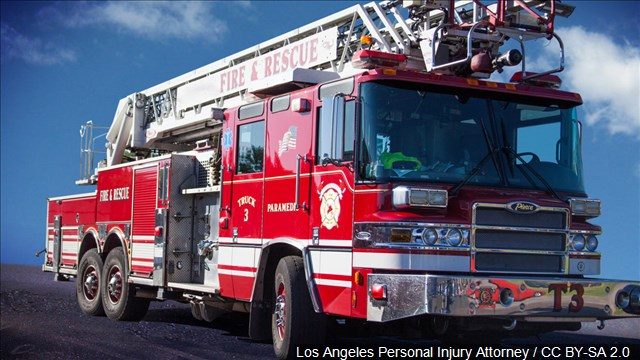 This morning at 1:42 am, Portland Fire & Rescue was dispatched to a two story residential fire at 2015 SE Clinton Ave. When fire crews arrived, they found heavy fire in an attached garage that was possibly beginning to burn into the home. Fire crews began extinguishing the fire and within five minutes of their arrival, another fire crew had completed a search of all floors of the smoke-filled house. They confirmed that all occupants were safely out of their home.

Due to concerns about the fire’s rapid fire growth through the walls and into the attic, the Incident Commander initiated a second alarm at 2:03 am, bringing an additional 11 apparatus and an additional 31 PF&R responders to the fire scene for assistance. Upon further investigation, no fire was found in the attic and the second alarm companies were sent back to their stations.

The fire was contained to the attached garage and the adjacent laundry room and had not extended further into the house. The fire was determined to be fully under control at 2:31 am. There were no injuries to any occupants of the house or firefighters on scene.

Due to collapse risk in the involved garage hindering investigation of this fire, the cause is undetermined at this time. Total damage is estimated to be $150,000. Red Cross was called to assist the two displaced adult occupants.

Properly working smoke detectors awoke the occupants of this house, after which they discovered the fire in their attached garage. PF&R reminds Portlanders to check their smoke detector batteries this March 10th when clocks are set forward for daylight savings time. Additionally, remember to keep interior garage doors closed to prevent fire spread and to “get out, stay out” of a residence in the event of smoke or fire.

A house fire broke out in Southeast Portland early this morning. Portland Fire and Rescue says the fire started a little after 1:30am in the garage of a home at 115th and Clinton. That’s just south of Division, near West Powellhurst Park. No one was hurt. It’s unclear what caused the fire. The gas company was also called out to the scene. The Red Cross is helping two people who were displaced.

Tweets From Portland Fire and Rescue:

2nd alarm has been cancelled. Fire is under control. Gas and power co called to scene, PF&R investigator on scene. PF&R PIO no longer responding to scene.

PF&R is on scene of a 2nd alarm residential house fire at SE 115th/Clinton, fire started in the garage, no injuries to occupants or firefighters on scene. PF&R PIO en route.