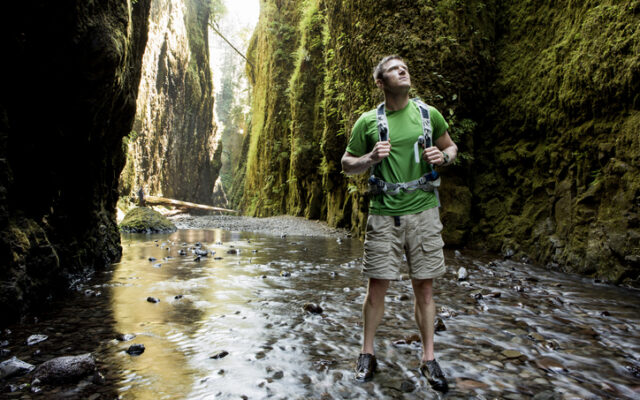 A man hiking a narrow gorge to Oneonta Falls.

After the 2017 wildfire and more recent landslides, it’s finally reopening time for the Eagle Creek trail.

Hikers will be able to take in the sounds and sights of Punchbowl or Tunnel Falls once more.

The U.S. Forest Service has announced the Eagle Creek Recreation Area and Trail have both reopened.

They closed for more than 3 years, after a teenager threw a firework, sparking a 49 thousand acre wildfire in 2017. They tried to reopen in January of this year, but had to close again after heavy rains and flooding. Then a landslide in February left about four thousand cubic yards of debris that slid down the mountainside and blocked the trail.

It took months of work, by a contractor, Forest Service crews and Pacific Crest Trail Association volunteers, but now it’s safe to go back in and enjoy some of the most famous trails in the Columbia River Gorge.