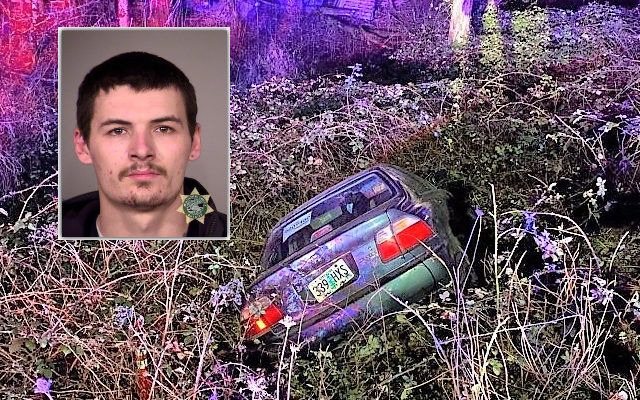 PORTLAND, Ore. — A man wanted on warrants was arrested after a wild pursuit in two stolen vehicles back and forth between Portland and Vancouver that lasted about an hour on Friday night.  The pursuit was terminated several times for safety reasons.

The driver sped away from officers at North Houghton Street and Foss Avenue around 7:30pm.  A plane from the Portland Police Air Support Unit followed him across state lines.  The suspect took Interstate 5 northbound into Washington to State Route 14 and back on I-5 southbound into Oregon.  He pulled into the parking lot at Cascade Station and took off in another stolen vehicle at more than 100 miles an hour onto Interstate 205 northbound back to Vancouver.  Then he got back onto I-5 southbound and exited at Marine Drive, driving reckless through several neighborhoods, running red lights and nearly crashing head-on into traffic.

Police used spike strips twice at Northeast 122nd and Sandy and again near Northeast 185th Avenue, where the suspect crossed the center line and kept on going with a deflated tire at 60 to 70 miles an hour.  He finally crashed off the road near Northeast 223rd Avenue in Fairview.

25-year-old Dylan Miller is charged with attempt to elude by vehicle, reckless driving, reckless endangering, unauthorized use of a motor vehicle, possession of a stolen motor vehicle and some previous warrants.

There were no injuries reported during the chase, but investigators would like to talk with anyone who was nearly hit.