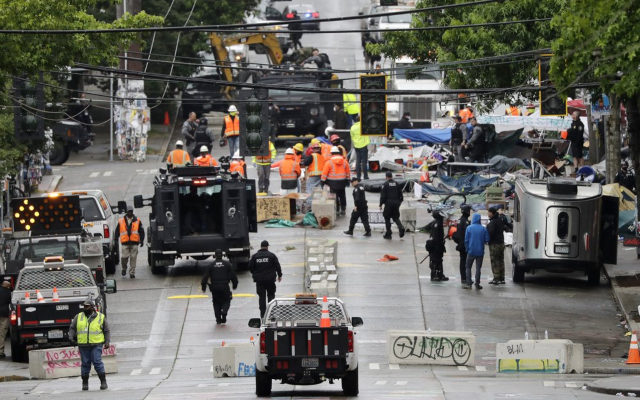 Police and city workers fill a street occupied hours earlier by an encampment of protesters Wednesday, July 1, 2020, in Seattle, where streets had been blocked off in an area demonstrators had occupied for weeks. Seattle police showed up in force earlier in the day at the "occupied" protest zone, tore down demonstrators' tents and used bicycles to herd the protesters after the mayor ordered the area cleared following two fatal shootings in less than two weeks. The "Capitol Hill Occupied Protest" zone was set up near downtown following the death of George Floyd while in police custody in Minneapolis. (AP Photo/Elaine Thompson)

SEATTLE (AP) — Police on Wednesday forcibly cleared out Seattle’s “occupied” protest zone after about two weeks in a situation that had attracted the complaints of local business owners and the ire of President Donald Trump during a number of Twitter posts.

“Our job is to support peaceful demonstration but what has happened on these streets over the last two weeks is lawless and it’s brutal and bottom line it is simply unacceptable,” Police Chief Carmen Best said.

Officers stood shoulder-to-shoulder on several streets at dawn while others created a makeshift fence with their bicycles, using it to push dozens of protesters back away from the center of the “Capitol Hill Occupied Protest” zone just east of downtown.

The group had occupied several blocks around a park after police abandoned a precinct station following standoffs and clashes that were part of the nationwide unrest over the killing of George Floyd in Minneapolis.

As residents neighborhood watched from balconies, police cleared out the protesters’ tents from the park and made sure no one was left in the park’s bathrooms.

One protest organizer, Derrek Allen Jones II, said some demonstrators attempted to stay but were surprised by the early intervention by officers who were “trampling everything I seen in sight, flipping tables.”

“People were trying to hold their ground but you could see the cops literally storm through people’s beds while they were sleeping. And literally say ‘If you don’t get out, we will force you out or arrest you,’” he said.

One man dressed in black was peacefully led away in handcuffs and other demonstrators sat on the wet ground until their small group was handcuffed and detained.

Police also tore down fences that protesters had erected around their tents and used batons to poke inside bushes, apparently looking for people who might be hiding. One officer took down a sign saying “we are not leaving until our demands are met: 1. Defund SPD by 50% now. 2. Fund Black Communities. 3. Free all protesters.”

After police evicted the protesters, heavy equipment was used to remove concrete barriers, cart away debris from the encampments while officers strung yellow caution tape from tree to tree warning people not to reenter.

’I was just stunned by the amount of graffiti, garbage and property destruction,” Best said after she walked around the area.

“The recent public safety threats have been well documented,” Durkan said at a news conference Wednesday afternoon. ”These acts of gun violence resulted in the tragic deaths of two teenagers, with multiple others seriously wounded. Despite continued efforts to deescalate and bring community together, this violence demanded action.”

Durkan also said while she supported the police in making arrests Wednesday, she doesn’t think many of those arrested for misdemeanors should be prosecuted.

Best said in addition to the fatal shootings, robberies, assaults, violence and property crimes have occurred in the area in the last few weeks. She said she wanted police to move back into the precinct so officers could better respond to needs in the area. Protesters have said they should not be blamed for the violence in the area.

There had been mounting calls by critics, including Trump, to remove protesters following the fatal shootings. A group of local business owners sued the city, claiming that officials abandoned the area and made it impossible to run businesses because there was no police or fire protection.

U.S. Attorney General William Barr praised Best for what he called “her courage and leadership in restoring the rule of law in Seattle.”

“Chief Best has rightly committed to continue the substantive discussion while ending the violence, which threatens innocent people and undermines the very rule-of-law principles that the protesters profess to defend,” he said in a statement.