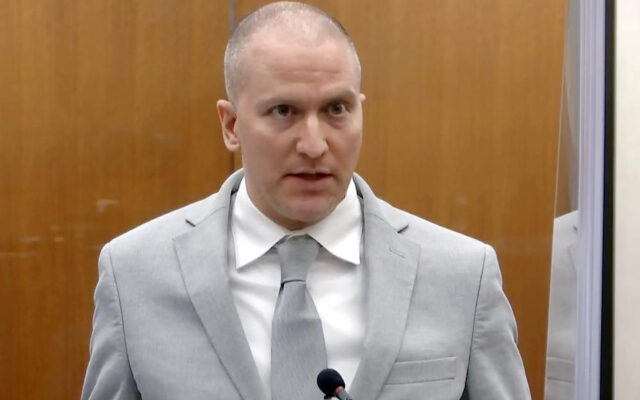 Chauvin, who is white, was convicted this spring of state murder and manslaughter charges for pinning his knee against Floyd’s neck during a May 25, 2020, arrest as the Black man said he couldn’t breathe Chauvin was sentenced to 22 1/2 years in that case.

The federal charge alleged that Chauvin deprived Floyd of his rights by kneeling on his neck as he was handcuffed and not resisting.

Chauvin appeared in person Wednesday for the change of plea hearing in an orange short-sleeve prison shirt and was led into and out of the court in handcuffs. He said “Guilty, your honor” to confirm his pleas in Floyd’s death and an unrelated 2017 case, and acknowledged that he was guilty of the acts alleged.

Three other former officers — Thomas Lane, J. Kueng and Tou Thao — were indicted on federal charges alongside Chauvin earlier this year. They are still on course for trial early next year on those charges, with a state trial still to come.

Floyd’s arrest and death, which a bystander captured on cellphone video, sparked mass protests nationwide calling for an end to racial inequality and police mistreatment of Black people.

As part of the plea deal, Chauvin also pleaded guilty to violating the rights of a then-14-year-old boy during a 2017 arrest in which he held the boy by the throat, hit him in the head with a flashlight and held his knee on the boy’s neck and upper back while he was prone, handcuffed and not resisting.

Several members of Floyd’s family were present, as was the then-teenager involved in the 2017 arrest, according to a pool reporter. As they left the courtroom, Floyd’s brother Philonise said to Chauvin’s 2017 victim: “It’s a good day for justice.”

Nine people appeared to support Chauvin, including family members. He waved and smiled at them as he entered and left the courtroom, according to the pool report.

George Floyd’s nephew, Brandon Williams, afterward called Chauvin a “monster” who should have been arrested in the 2017 incident.

“Had he been held accountable for what he did in 2917 to that minor, George Floyd will still be here,” Williams said. “Today he had a chance to blow kisses and give air hugs to his family. We can’t do that.”

An attorney for Floyd’s family, Jeff Storms, said they planned to head to Minneapolis later in the day to support the family of Daunte Wright, a 20-year-old Black man who was fatally shot during a traffic stop in the midst of Chauvin’s state trial. The police officer in that case, Kim Potter, is on trial on manslaughter charges.

Floyd’s arrest and death, which a bystander captured on cellphone video, sparked mass protests nationwide that called for an end to racial inequality and police mistreatment of Black people.

To bring federal charges in deaths involving police, prosecutors must believe an officer acted under the “color of law,” or government authority, and willfully deprived someone of their constitutional rights. That’s a high legal standard. An accident, bad judgment or simple negligence on the officer’s part isn’t enough to support federal charges. Prosecutors have to prove the officer knew what he was doing was wrong in that moment but did it anyway.

According to evidence in the state case against Chauvin, Kueng and Lane helped restrain the 46-year-old Floyd as he was on the ground — Kueng knelt on Floyd’s back and Lane held down Floyd’s legs. Thao held back bystanders and kept them from intervening during the 9 1/2-minute restraint.

All four former officers were charged broadly in federal court with depriving Floyd of his rights while acting under government authority.

In the 2017 case involving the then-14-year-old boy, Chauvin is charged with depriving the boy, who was handcuffed and not resisting, of his right to be free of unreasonable force when he held him by the throat, hit him in the head with a flashlight and held his knee on the boy’s neck and upper back while he was in a prone position.

According to a police report from that 2017 encounter, Chauvin wrote that the teen resisted arrest and after the teen, whom he described as 6-foot-2 and about 240 pounds, was handcuffed, Chauvin “used body weight to pin” him to the floor. The boy was bleeding from the ear and needed two stitches.

That encounter was one of several mentioned in state court filings that prosecutors said showed Chauvin had used neck or head and upper body restraints seven times before dating back to 2014, including four times state prosecutors said he went too far and held the restraints “beyond the point when such force was needed under the circumstances.”

The other three former officers are still expected to go to trial on federal charges in January, and they face state trial on aiding and abetting counts in March.