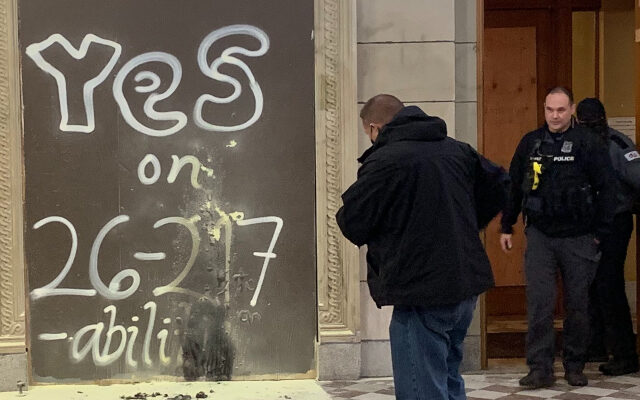 PORTLAND, Ore. — Demonstrators gathered at Arbor Lodge Park in North Portland before moving to the home of Portland City Commissioner Dan Ryan, the Portland Police Association office and City Hall on Thursday night.  Two people were arrested and a third was cited.

A much smaller group from the night before blocked traffic as they made it to Commissioner Ryan’s home on North Holman Street around 9:00pm.

This was the fourth night in the past week that the commissioner has been the victim of vandalism and his neighborhood disrupted.  A window and potted plants were broke, and individuals threw burning flares and balloons filled with paint at Commissioner Ryan’s residence.

“I appreciate that members of our community are passionate. But trespassing at the home I share with my fiancé; disrupting and intimidating my neighbors and me—and vandalizing my property—is not a productive or safe way to express opinions. I have elderly neighbors and I fear for their safety and well-being,” said Commissioner Ryan in a written statement.  “I am an elected official working hard to serve the city I love. I am committed to listening and engaging in respectful dialogue. The protestors coming to my home are using the exact tactics they claim to be railing against—bullying and intimidation. I ask that they be accountable to one another, and think before they act.”

Police declared an unlawful assembly due to the criminal activity and dispersed the crowd.

Unified Command: To the group gathered on N Holman St: This has been declared an unlawful assembly, do not damage property or participate in criminal behavior. If you do, you are subject to citation or arrest.

Some demonstrators reconvened near the Portland Police Association before heading back towards Arbor Lodge Park.

Others gathered around 10:00pm outside Portland City Hall where doors were set on fire.  It was put out by security guards.  Investigators believe a burning object was thrown or placed at the door.  The arsonist was not located.

The driver of a vehicle related to the demonstration was arrested after failing failing to stop for police.  36-year-old Bryan Ortega-Schwartz was arrested several blocks away for eluding and reckless driving.  He was released on his own recognizance.

Another person was arrested and released.  30-year-old Michael Kinney is charged with interfering with a peace officer, resisting arrest and failure to display a license.

27-year-old Daniel Supriyadi of Lake Oswego was criminally cited for disorderly conduct and interfering with a peace officer.

The crowd dispersed late in the evening.

Portland Mayor Ted Wheeler released the following statement on Friday morning: “Last night’s criminal destruction and attack on Commissioner Ryan’s home are reprehensible.  Violence, criminal destruction and intimidation are unacceptable and will not be tolerated.  Those responsible must be found, investigated and prosecuted to the fullest extent of the law.  I condemn anyone who uses violence to attempt to silence the voices of others.”

Commissioner Jo Ann Hardesty responded: “Last night a group of people vandalized Commissioner Ryan’s home following a tense city council hearing on the city’s budget.  I want to be clear: we can disagree and be upset over these issues, but I do not condone what took place at the Commissioner’s home last night and those who engaged in the acts need to be held responsible.  Fighting for systemic change is messy and complicated, but what shouldn’t be complicated is recognizing when lines have been crossed, and that’s what happened last night.”