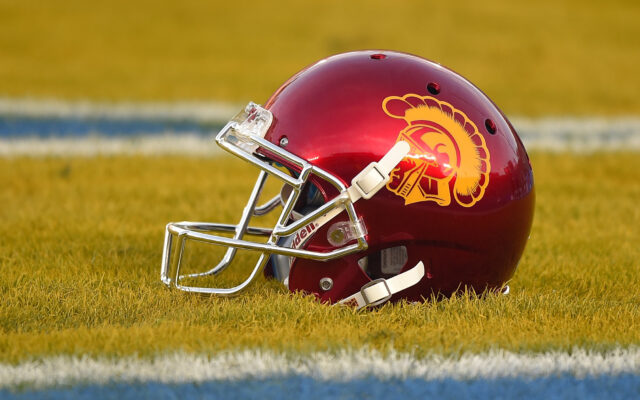 FILE - A Southern California helmet sits in the end zone prior to an NCAA college football game against UCLA, Saturday, Nov. 22, 2014, in Pasadena, Calif. A Los Angeles jury could be the first in the U.S. to decide whether the NCAA failed to protect college football players from repeated blows to the head that cause serious brain injuries. Opening statements are scheduled Thursday, Oct. 20, 2022, in the case of a former University of Southern California linebacker who had significant brain damage when he died at age 49. (AP Photo/Mark J. Terrill, File)

LOS ANGELES (AP) – A Los Angeles jury has rejected a claim by the widow of a former USC football player who said the NCAA failed to protect him from repeated head trauma that led to his death.

The jury found Tuesday that the NCAA was not negligent in the death of Matthew Gee.

Lawyers for the widow of Gee, a linebacker on the 1990 Rose Bowl-winning squad, say he endured an estimated 6,000 hits that caused permanent brain damage and led to cocaine and alcohol abuse that eventually killed him at age 49.

The NCAA says it had nothing to do with his death.