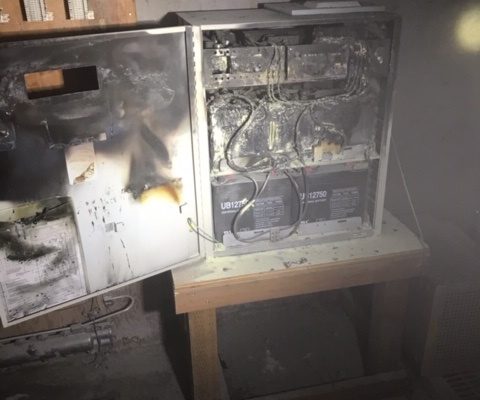 Longview, Wash. – Crews are finishing the clean up at the Community Home Health and Hospice Building in Longview. An electrical fire did some damage early Saturday. No one was there at the time. Firefighters were able to knock the fire down and keep it contained thanks to the building’s alarm system. The fire started from a computer system’s back-up batteries.

Longview Fire Department was called to an activated fire alarm at 1000 12th Avenue in Longview, around 2AM, early Saturday morning. This is the Community Home Health & Hospice Building, a commercial office building that was unoccupied at the time of the alarm.

Firefighters arrived to find a smoke condition growing on the first floor. Further investigation revealed an electrical room in the basement had a fire showing in a battery back-up system used for the building’s numerous computer work stations. Firefighters quickly deployed dry chemical fire extinguishers designed for electrical fires. After the fire was knocked down, power to this system was de-energized. The majority of fire damage was confined to the unit’s storage cabinet and internal wiring and batteries.

The main concern was a large amount of acrid, electrical-type smoke that spread throughout the building. Firefighters used special high-powered fans to ventilate the facility.

About two hours later, the building was deemed safe to occupy. Hospice maintenance personnel were on-scene to take control of the complex and begin the process of returning the facility to normal operations.

The origin of the fire was the battery back-up system, which contained several large 12-volt car-type batteries. However, what may have caused this system to fail is undetermined. The unit was heavily damaged and a certified electrician will be needed to safely remove and replace this system.

Battalion Chief Blake Tomlinson stated, “This was a great example of how important fire alarm systems are for any building. We got the alert early when the system detected smoke, and with our fast response we were able to get a quick knock down, and keep impacts to the building at a minimum. Without a fire protection system, this would have been a bad fire. Hospice is an amazing organization, and so important to this region. We’re happy they can continue their important work, and this building is certainly part of that mission.”