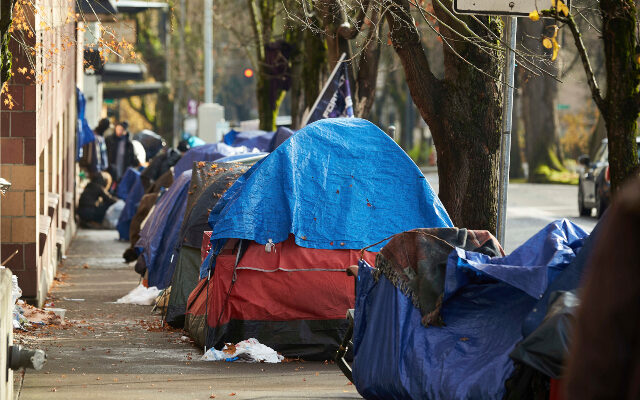 Portland, Ore. – An ominous presence loomed over the Portland City Council’s November 1st work session, as the fate of thousands of those that are housing insecure is largely unknown as we enter what Interim Director of the Portland Housing Bureau, Molly Rogers, called a “perfect storm of destabilizing housing conditions.” Commissioner Dan Ryan held the work session to discuss how bad the housing crisis has gotten, as well as rental housing stabilization programs that are currently being used and can be used to help handle the issue. Much of the focus was on the more than 800 Multiple-Unit Limited Tax Exemption (MULTE) units, which is a program to provide affordable housing to those making at least 60% of the region’s median family income (MFI), as the exemption will expire for a number of units. Which could lead to, possibly, more than 1,600 people homeless. But overall, with a deficit of more than 25,000 affordable homes, there’s fear that there could be a mass wave of homelessness under these current economic and housing conditions. As evidence that renters are at risk, there’s been a major spike in eviction court cases as well.

“We’re in a very interesting place. I would say it’s a bit of an unprecedented moment where we’re not quite sure how these conditions will come together,” Rogers said. “We also now face an economy with increasing inflationary pressures, rising interest rates, and increased construction costs.”

After dipping way down during the pandemic, the average rent in Portland has quickly surged in the last two years by 9.5% to a record high. A lack of supply in housing is largely seen as the biggest driver of this “perfect storm,” but it’s also being driven by a historically high rent cap, of 14.6%, set by the state, vacancy rates dropping to virtually nothing, the end of COVID era protections like the eviction moratorium and rental assistance set to dry up by February 2023. Rent assistance helped keep more than 22,000 people housed, most of which were people of color.

“We are seeing the beginnings of eviction court filings increase, surpassing pre-pandemic levels. So we are deeply concerned that these factors combined could lead us to a wave of evictions and push more of our residents into homelessness,” Rogers said. The average number of eviction court filings per month before the pandemic was about 400 to 500. As tenant protections expired in the summer, filings shot up to more than 800 in August 2022. This comes at the same time as the Eviction Legal Defense fund, which used American Rescue Plan dollars, is roughly three months away from running out.

Issues over the MULTE program garnered most of the attention. It recently made headlines after residents of the Prescott in the Overlook neighborhood protested rent hikes after their building was purchased by a new owner. The program waives property taxes for the building if landlords voluntarily set aside 20% of their apartment’s units for affordable housing. The new owner raised rents to the highest possible amount allowed under MULTE rules, which meant paying an additional $400 a month for some tenants.

“One thing we should do, is stop pretending 80% MFI is affordable,” said commissioner Jo Ann Hardesty, who argued there needs to be some way to force developers to build affordable units instead of volunteering to participate in a program. Adding that the tax break isn’t lucrative enough to get companies to opt in. “The fact anything new that were building is exempt from rent control for 15 years is a bit insane.”

Part of her issue is that the MULTE program is only for 10 years. So that leaves a five year window where landlords can raise rents as high as they want, and is why there is worry among the housing bureau that those living at the 800 MULTE units could be at risk of eviction. This issue has been fixed for future properties, but city leaders cannot retroactively make changes to the tax exemption buildings agreed to in the prior program without state intervention. Mayor Ted Wheeler mentioned it would be bad business for the city to change the terms of the agreement.

“If you want capital invested in the city of Portland for the purpose of housing you cannot change the rules midway. That would absolutely cause people to make other investment decisions over the long run,” said Wheeler, who believes extending the MULTE program is an option to ensure those 800 units are safe. “I bet a lot of people (building owners) who agreed to work with us under those terms would gladly extend their rent protections in exchange for an extended tax abatement.”

To which Hardesty said “we don’t have landlords or builders here that are going to do this out of the kindness of their heart.”

It should be noted just 69 units will be impacted by this issue from now until 2024. But it kicked off the conversation about what can be done to get a grasp on this perfect storm of housing destabilization.

“We provide direct subsidies (to incentivize builders) to do regulated affordable housing. We’re one of the few communities that does a 99 year affordability agreement and that’s the best way to address market failures,” Rogers said, when discussing some of the ongoing actions to keep Portlanders housed. “Inclusionary housing is the mandatory program that takes advantage of the private marketplace to provide a subset of units at an affordable rate. And of course we do land banking. Often when we do developments, we transfer that land to a nonprofit that will build affordable housing.”

Rogers adds, rent assistance, tenant protections and changing land use laws to allow housing to be more densely built are some of their other tools that have been effective.

Before moving on to the final piece of the presentation on what investments the city should make going forward, the Housing Bureau flexed the huge boom in affordable units that have been built since a housing emergency was declared in 2015, as reason for optimism.

“Since 2015, the city has had its highest affordable housing production in its history,” Rogers said due to both the Portland and Metro housing bond. “We’ve opened more than 3,473 affordable housing units since then (roughly half of the city’s entire inventory). Nearly 40% of these units are deeply affordable to families that make little or no income. In total, more than 6,500 people have been housed. We’re talking about low income seniors, those experiencing houselessness, families vulnerable to displacement, and working Portlanders whose incomes are unable to keep pace.”

Rogers suggested a number of steps that can be taken in the future to to not lose ground on this unprecedented production of affordable housing. At the local level they advocated for renewing the bond measures listed above. As well as, asked to extend the MULTE program, increase funding for rental assistance, increase funding for eviction legal defense and increase relocation assistance to align with inflation. Which is the program where a landlord has to pay moving fees if they increase rent.

At the state level, they asked city council to be a voice with the Housing Bureau to lobby for changes to a number of tenant protection bills. They also called upon the federal government to help more.

“We ask for your support in helping to reform the Low Income Housing Tax Credit, and specifically, increasing the amount of Private Activity Bonds allocated to the states to help support our affordable housing development pipeline,” said Matthew Tschabold with the Portland Housing Bureau. “Continue to advocate for resources and rights to counsel for renters as they go through the court eviction process. And then establish more entitlement funding, and fully fund the affordable housing needs for the production and preservation of affordable housing and the needs for rent assistance for renters in Portland.”

“What I see, as we typically do, we just go back to the toolbox of the tools we’ve always used and somehow expect them to work differently. I hope you will be more creative and not be stuck in the traditional way that the Housing Bureau has always operated, and really think, what would be in the best interest of people who work, live and play in Portland who cannot afford to live in this city,” Hardesty said. “Come up with something, big, bold and visionary.”

Wheeler believes the city is being asked too much to get a grip on this issue plaguing cities all across the U.S.

“Some of this is as a result of local policies that have been implemented over a period of many years, but the vast majority are the result of either macro economic trends, or things that have been done by other governments beyond the city of Portland,” Wheeler said. “The federal governments rent support is expiring. I heard programs like our legal aid program, which was funded through COVID dollars, those dollars are expiring. I heard discussions about state rental protections expiring. I just want to be crystal clear, in a Perfect Storm we cannot fight the storm alone.”