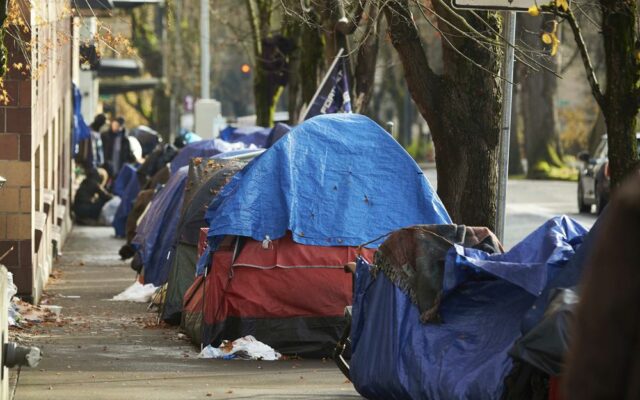 FILE - Tents line the sidewalk on SW Clay St in Portland, Ore., on Dec. 9, 2020. City council members in Portland, Oregon, are set to vote on a resolution that would ban homeless street camping. Mayor Ted Wheeler has said the aim is to gradually move people from the hundreds of encampments scattered across Portland to large, sanctioned campsites designated by the city. (AP Photo/Craig Mitchelldyer, File)

PORTLAND, Ore.– The Portland City Council has approved a five part plan to change the way it manages the homeless crisis. Over 18 months, six camps will be created. Each camp will have up to 250 homeless people and unsanctioned camps will be banned. There will be jobs programs, mental health and addiction support. The city will work the District Attorney’s Office to create a diversion program that would give homeless people an opportunity to stay out of jail. It will also increase the pace of building 20-thousand affordable housing units over a decade.