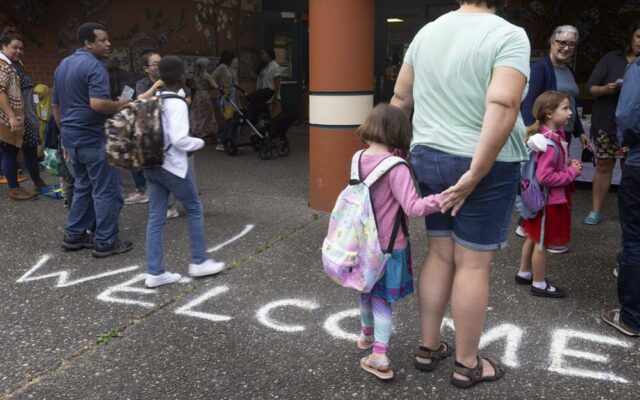 SEATTLE (AP) — Teachers, administrators and parent volunteers welcomed children back to school in Seattle on Wednesday following a weeklong educators strike that delayed the start of classes.

Seattle Public Schools and the Seattle Education Association announced Monday night that they had reached a tentative agreement on a new contract, and the union’s membership voted Tuesday to suspend the walkout pending ratification of the contract.

It’s a three-year deal that will maintain or in some cases improve ratios of special-education or multilingual students to staff, add baseline mental health staffing in all schools, and raise pay above inflation markers, the Seattle Education Association said.

Brandon Banks walked his son into Denny International Middle School for his first day of sixth grade — and his first day back at school in two years, after he attended virtually during the pandemic.

“This is really exciting and a nervous time for him,” Banks said. “I’m just really, really glad that this is beginning again.”

The strike began Sept. 7, which was supposed to be the first day for approximately 49,000 students in the district. While 95% of voting union members approved the strike, just 57% voted in favor of Tuesday’s resolution to suspend it, the union said.

Picketing teachers said their main concern was educational and emotional help for students, especially those with special needs or learning difficulties that have been exacerbated by the pandemic.

Banks and several other parents said they appreciated the efforts.

“There’s just a huge struggle going on for workers trying to really fight for what it is that they believe in and what they need to do their jobs appropriately,” Banks said. “So I totally understood and I’m on board. My son’s in special ed, so knowing that they’re fighting for mental health supports and better special education made perfect sense to me.”

Teachers in the city have seen healthy raises since their last strike in 2015, with many making more than $100,000, thanks largely to a new state education funding model. The union had said it was primarily focused on winning raises for its lower-paid members, including instructional assistants and front office staff. Paraeducators in Seattle Public Schools start at $19 an hour — nowhere near enough to afford to live in the city, many say.

The district had sought to increase the amount of time disabled children spend in general education classrooms, and also to eliminate ratios dictating how many students may be assigned to each special-education professional. The district said that would allow it to focus on student needs rather than fixed staffing ratios, but teachers worried it would mean less support, higher case-loads and less time to spend with each student.

The tentative agreement, which needs approval from the school board as well as the union membership, would cost the district an additional $200 million-plus over three years. It includes a raise of 7% across the board in the first year, 5.5% of which is a state-funded increase tied to inflation, plus a $1,500 bonus for lower-paid hourly workers, including office staff, family support staff and instructional assistants. There is a cap on caseloads for mental health staff.

It also would provide an additional $50,000 for libraries in schools that serve more students from low-income families and might not have well-funded parent-teacher associations to supplement state funding for libraries.

Students will have to make up the five school days they missed.

Districts around the country have faced labor challenges as the pandemic put extraordinary stress on teachers and students.

Teachers in Minneapolis, Chicago and Sacramento walked out earlier this year before securing new agreements.