Cheers For Jackson As Biden Declares “Moment Of Real Change” 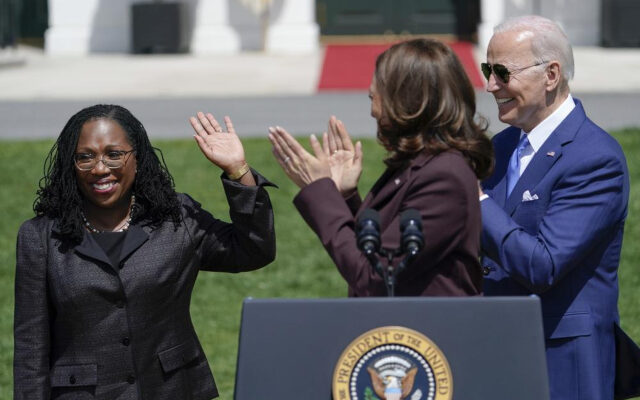 President Joe Biden and Vice President Kamala Harris applaud Judge Ketanji Brown Jackson as Harris speaks during an event on the South Lawn of the White House in Washington, Friday, April 8, 2022, celebrating the confirmation of Jackson as the first Black woman to reach the Supreme Court. (AP Photo/Andrew Harnik)

WASHINGTON (AP) — Tearfully embracing a history-making moment for the nation, Judge Ketanji Brown Jackson said Friday her confirmation as the first Black woman to the Supreme Court showed the progress of America, declaring, ″We’ve made it — all of us..”

Jackson delivered emotional remarks on the sunny White House South Lawn a day after the Senate approved her nomination, saying, it was a moment the entire country could be proud of.

“We have come a long way toward perfecting our union,” she said. “In my family, it took just one generation to go from segregation to the Supreme Court of the United States.”

She added: “It has taken 232 years and 115 prior appointments for a Black woman to be selected to serve on the Supreme Court of the United States. But we’ve made it. We’ve made it, all of us.”