Campaign Files New Lawsuit Over Error On Washington County Ballots, Wants Them To Not Be Certified 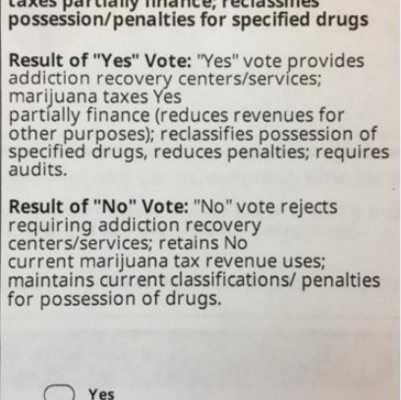 Washington County, Ore. – A new lawsuit has been filed over that typo on the ballots in Washington County we first reported on last week. The No on Measure 110 Campaign claims the tainted ballots should not be certified.  You’ll remember we reported the error that the words “YES” and “NO” are randomly inserted in the Oregon Statewide measures. The No on Measure 110 Campaign says the error reserves the meaning of their side on the issue about using marijuana tax revenue for schools and other programs. They say their lawsuit only applies to Measure 110 on Washington county ballots, and does not affect any of the other candidates or measures, and they add that people should continue to vote.

Last week Philip Bransford with Washington County explained once they discovered the error they went to the Oregon Secretary of State’s Office and consulted with them about how egregious the typo was and if it would disrupt the election’s outcome. Both the Campaign and Elections Officials determined it was not a problem, voters could work around the typo without any issue, and they were moving forward with collecting and tallying the votes.

I did reach out to the YES on 110 campaign to get their statement and reaction, here’s what they tell us:

“Oregon needs a humane and effective approach to drug addiction, where Oregonians with addiction get treatment instead of lifelong criminal records that ruin lives and squander taxpayer money. However, some people are so invested in the status quo that they are trying to throw out votes that have already been cast, questioning the integrity of the election. County election officials and the Secretary of State have already resolved this matter. We think all the votes in Washington County should be counted, and we hope to earn Washington County voters’ support for a more drug addiction treatment.” We also would like to point you to this statement from Washington County: https://www.co.washington.or.us/AssessmentTaxation/Elections/News/ballot-error.cfm

Here’s the press release sent out today by the No on Measure 110 Campaign:

“We cannot ignore the fact that over 380,000 voters in Washington County have been disenfranchised by faulty, misleading ballots, which have made a fair election impossible,” said Jim O’Rourke of the No on Measure 110 campaign. “Voters in Washington County have the right to have correct ballots mailed to them and to have the same accurate information as voters across the rest of Oregon. Unfortunately, the county elections office denied voters that right by sending glaringly incorrect ballots, and then the Washington County Elections Office and the Secretary of State’s Office denied voters that right by failing to reissue corrected, accurate ballots.”

The Washington County ballot error inserts a “No” into the description of the measure’s impact, leading voters to believe a “No” vote would move money away from what’s currently funded by marijuana taxes, the complete opposite of the truth. A “Yes” vote would divert funds from schools and county mental health programs, NOT a “No” vote. According to the Secretary of State’s financial impact statement, over the next three years alone Measure 110 would divert $90 million away from the State School Fund, and $56 million from city and county addiction treatment and prevention services.

Last week the No on Measure 110 campaign called on Oregon’s Director of Elections to fix the error by reissuing correct ballots. Ballots were not reissued. Washington County has 13 percent of all Oregon voters—384,524 registered voters—which means the error disenfranchises a significant portion of the electorate.

“We asked for a reasonable fix. But the Secretary of State refused to take any action to correct this glaring mistake,” said O’Rourke. “Voters deserve a fair election. Voters deserve to know how Measure 110 would harm their communities. Oregon’s treatment providers and recovery community leaders have been fighting to get the truth out about this measure—which decriminalizes hard drugs for kids and takes money from schools—ever since the “Yes” campaign began misleading the public.”

He added, “The ballot error is confusion on top of a lot of misleading information. From the ballot title to the ballot description to the proponents’ slogan, voters have been misled about the actual content of this measure.”

The No on Measure 110 campaign will be filing a similar lawsuit in Marion County against the Secretary of State.

Take a look at the typo here: 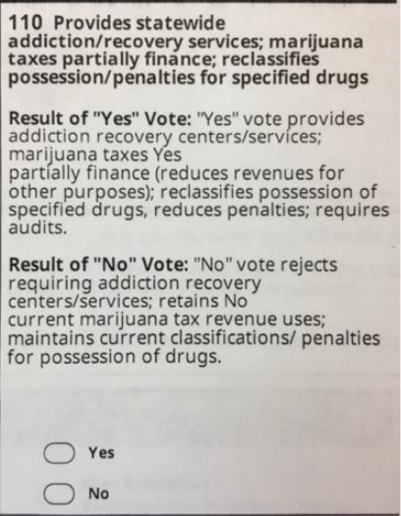 There is a little problem on the ballots of Washington county voters. Philip Bransford with Washington county apologized, saying it looks like the words YES and NO are randomly inserted on the four Oregon statewide measures. KXL’s Jacob Dean talked with him about it.

They met with the Secretary of State’s office and concluded the awkward typo will not impact the outcome of the measures, and does not really confuse voters, it’s just an out-of-place typo. He says most voters are not confused by the error.

Click here to see the typo on the ballot.

Here is a copy of the statement from Philip:

Washington County Elections officials have discovered an error in the four state ballot measures’ explanation of the result of the vote on the General Election ballot.

According to Washington County Election Manager, Mickie Kawai, all State measures (107, 108, 109 and 110) were printed with the response of “Yes” and “No” randomly buried in the content of the “Result of ‘Yes’ Vote:” and “Result of ‘No’ Vote:” sections on the ballot. This error was created when the certified (pdf) text was converted, copied, and pasted into the ballot design software. This extra text was not noticed when proofing the content. According to Kawai, “We will be reviewing our proofing procedures and will seek advice from other counties and other states as to their proofreading actions in an effort to create a system that will prevent errors like this in the future.”

Kawai consulted with the Secretary of State’s office and got confirmation that, despite the extra “Yes” and “No” in the “Result of” sections for each measure, the ovals for actually voting “Yes” or “No” on the ballot measures are correct and will still get counted as intended. Voters can utilize the summary flyer that is included with the mailed ballot or the State’s Voters’ Pamphlet for the full text and a correct “Result of “yes”/”no” Vote” statement.