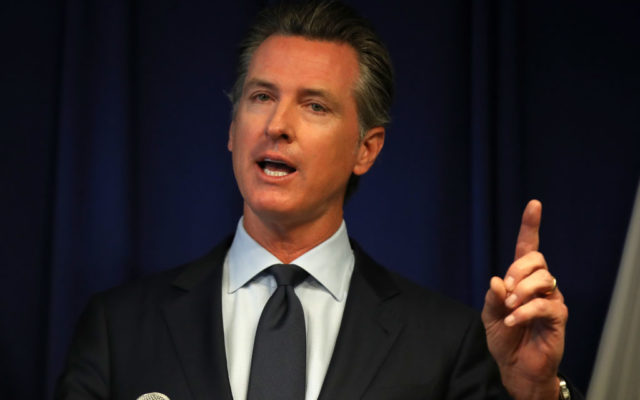 SACRAMENTO, CALIFORNIA - SEPTEMBER 18: California Gov. Gavin Newsom speaks during a news conference at the California justice department on September 18, 2019 in Sacramento, California. California Gov. Gavin Newsom, California attorney general Xavier Becerra and California Air Resources Board Chair Mary Nichols held a news conference in response to the Trump Administration's plan to revoke California’s waiver to establish vehicle emissions standards for greenhouse gas emissions and standards to require manufacturers to sell zero emissions vehicles. Under the federal Clean Air Act, California is allowed to set its own vehicle emissions standards that are at least as protective as the federal government’s standards. The state has received 100 waivers from the Environmental Protection Agency (EPA) for higher standards than federally mandated over the past 50 years. (Photo by Justin Sullivan/Getty Images)

(Sacramento, CA) — California’s governor is issuing a statewide order for people to stay home to slow the spread of the coronavirus. Gavin Newsom explained more than half of the people in California, over 25 million people, could be infected with the respiratory illness. That could result in thousands of hospitalizations, much more than the state’s hospital capacity. Folks will still be allowed to do essential tasks like going to the store, picking up medicine and going for walks. Newsom suggested law enforcement wouldn’t be enforcing the order, instead saying social pressure would regulate behavior. The statewide order follows similar orders in major California cities like Los Angeles and San Francisco.